Is Truth Stranger Than Fiction? Yes, Especially For Science Fiction

From warp drives to hyperspace, science fiction has continuously borrowed from, and sometimes anticipated, the state of the art in scientific progress. This has resulted in the perception that science and science fiction have a causal relationship, one finding direction from and fulfilling the science fantasy laid out before it.

But that is rarely the case, according to Lawrence Krauss, a Foundation professor in the School of Space and Earth Exploration and the Department of Physics at Arizona State University. No doubt, science fiction has taken inspiration from the cutting edge science of its day. And, as Stephen Hawking reaffirmed in the preface of Krauss's bestselling book, the Physics of Star Trek, science fiction helps inspire our imaginations. But Krauss believes science fiction is not a match for reality. 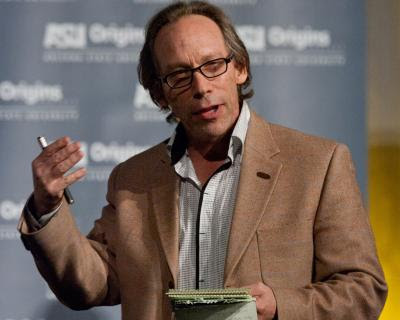 "Truth is stranger than fiction," Krauss said at the 2014 annual meeting of the American Association for the Advancement of Science in Chicago.

"The imagination of nature far exceeds the human imagination, which is why we constantly need to probe the universe via experimentation to make progress," he said. "In fact, I tend to think that what makes science fiction most interesting is what they missed, not what they got right."

Krauss, a renowned theoretical physicist and science popularizer, was giving his talk, "Physics of the future," on Feb. 14 at AAAS as part of a session titled "Where's my flying car? Science, science fiction and a changing vision of the future."

As examples, Krauss mentioned the World-Wide-Web, developed at the CERN scientific laboratory and which governs the world in ways that were not anticipated. He also described "The World Set Free," often quoted as a prophetic book by H.G. Wells, which was published in 1914 and anticipated the development of atomic weapons that could be used in war. It even coined the term "atomic bombs" decades before they became a harsh reality in the modern world and perhaps influencing some of the scientists who went on to create these weapons.

"Nevertheless not only did Wells' continually burning atomic weapons bear no resemblance to the engines of destruction in the real world," Krauss emphasized, "he thought it would unite the world into one society whereas we are painfully aware that it hasn't changed human thinking, except to divide the world into nuclear haves and have-nots."

"Nevertheless it is instructive, and fun, to compare the 'science' of science fiction with that of the real world," said Krauss, who also is the director of the Origins Project at ASU. "Rather than dwelling on things that don't work, it is fun to explore closely related things in the real world that might work."

Krauss discussed a variety of classical science fiction standbys – space exploration, faster than light travel, time travel and teleportation. It seems almost tragic that science fiction is full of space travelers, freely and technologically effortlessly fulfilling their manifest destiny in space while we remain stuck on Earth. But the reality of the situation, according to Krauss, is that space travel costs a lot of money and energy, is a very risky endeavor and humans, as "hundred-pound bags of water," are not built for space.

On a more positive vein, Krauss described how exotica live warp drive and time travel are not ruled out by known laws of nature, though from a practical perspective even if possible in principle they are likely to be impossible in practice. While it is not likely that humans will be "beamed" from one place to another, quantum teleportation might revolutionize computing in ways that science fiction has just begun to come to grips with, said Krauss, who has authored more than 300 scientific publications and nine books, including the international bestseller The Physics of Star Trek, a tour of the Star Trek universe and our universe, and Beyond Star Trek, which addressed recent exciting discoveries in physics and astronomy and takes a look at how the laws of physics relate to notions from popular culture.

Krauss concluded that predicting the future of science if fraught with problems.

"The best part of physics of the future is that we have no idea what the exciting discoveries of the future will be," he said. "If I knew what the next big thing would be, I would be working on it now!"