Researchers from ETH Zurich and the University of Tubingen describe a process that suppresses the formation of methane in soils that are rich in humic substances. For this process to work, the soils need to switch between having no oxygen and having oxygen.

The humic substances in peatlands (depicted, a bog in Scandinavia) work like a gigantic, rechargeable battery.

In the mid-1990s, researchers revealed that some anaerobic microorganisms in soils and sediments use humic substances as electron acceptors under anoxic conditions. However, the capacity of these substances to accept electrons is limited. Once the capacity is reached (i.e., the battery is fully charged), the bacteria in anoxic systems utilize other electron acceptors. If carbon dioxide is used as electron acceptor, the potent greenhouse gas methane is formed. Wetlands are responsible for fifteen to forty per cent of the global methane flux into the atmosphere. However, many wetlands release less methane than expected based on their areas and the microbial activity in these systems. This finding suggests that there are natural processes that suppress methane formation.
The soil bacterium Shewanella oneidensis can respire electrons to humic substances. 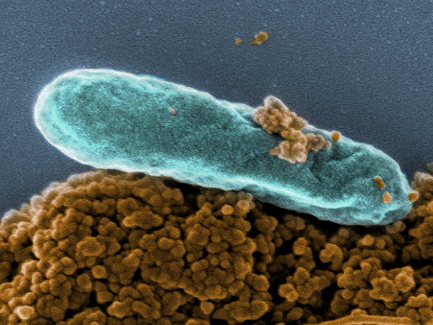 In a study published in Nature Geoscience, researchers including Dr. Michael Sander, a senior scientist in the Environmental Chemistry Group of ETH-Zurich Professor Kristopher McNeill, have now presented a process that likely contribute to the comparatively small releases of methane.
Humic substances short-circuit electrons to oxygen

In their lab model, the researchers used the bacterium Shewanella oneidensis MR-1, which was originally isolated from the sediment of a lake in New York State and which is easily cultivated in the lab. This organism is a facultative anaerobe bacterium, which means that it can live under both anoxic and oxic conditions. The researchers used four different well-characterized humic substances as electron acceptors.
Implications for wetlands

The results of this study contribute to a better understanding of carbon dynamics in temporarily anoxic wetlands. The process described in the study is expected to occur on a large scale, for instance in peatlands. If the water level in a peatland drops, oxygen enters into parts that were previously anoxic. The humic substances in these parts, which were charged by microorganisms in the absence of oxygen, then release the electrons to oxygen and thereby regenerate their capacity to accept electrons. Peatland soils therefore work like gigantic batteries that are periodically charged and discharged. This charging and discharging is expected to suppress the formation of methane in these systems.

The researchers estimated the extent to which this process supresses the formation of methane in northern peatlands. They estimated how many electrons humic substances accept under anoxic conditions and, under subsequent oxic condition, donate to oxygen. This estimation shows that methane emissions from these systems would be up to 170 per cent higher relative to the amount of methane that is currently released. “These results shows that electron transfer to and from humic substances is an important process with global implications,” says Sander. In order to further investigate this process, the researchers will continue with lab studies and, in the coming summer, also conduct field measurements in a peatland in Central Sweden.