A new study suggests that the magma sitting 4-5 kilometers beneath the surface of Oregon's Mount Hood has been stored in near-solid conditions for thousands of years, but that the time it takes to liquefy and potentially erupt is surprisingly short – perhaps as little as a couple of months.

Forecasts of when a volcano is ready to erupt could be a little closer thanks to work by geologists at the University of California, Davis, and Oregon State University published online Feb. 16 in the journal Nature. For an eruption to occur, the magma, or molten rock under the volcano must be sufficiently mobile to erupt.

Mount Hood, in the Oregon Cascades, doesn't have a highly explosive history. 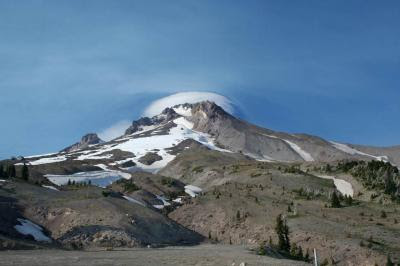 The key, scientists say, is to elevate the temperature of the rock to more than 750 degrees Celsius, which can happen when hot magma from deep within the Earth's crust rises to the surface. It is the mixing of the two types of magma that triggered Mount Hood's last two eruptions – about 220 and 1,500 years ago, said Adam Kent, an Oregon State University geologist and co-author of the study.

Results of the research, which was funded by the National Science Foundation, were published this week in the journal Nature.

"If the temperature of the rock is too cold, the magma is like peanut butter in a refrigerator," Kent said. "It just isn't very mobile. For Mount Hood, the threshold seems to be about 750 degrees (C) – if it warms up just 50 to 75 degrees above that, it greatly increases the viscosity of the magma and makes it easier to mobilize."

Thus the scientists are interested in the temperature at which magma resides in the crust, they say, since it is likely to have important influence over the timing and types of eruptions that could occur. The hotter magma from down deep warms the cooler magma stored at 4-5 kilometers, making it possible for both magmas to mix and to be transported to the surface to eventually produce an eruption.

The good news, Kent said, is that Mount Hood's eruptions are not particularly violent. Instead of exploding, the magma tends to ooze out the top of the peak. A previous study by Kent and OSU postdoctoral researcher Alison Koleszar found that the mixing of the two magma sources – which have different compositions – is both a trigger to an eruption and a constraining factor on how violent it can be.

"What happens when they mix is what happens when you squeeze a tube of toothpaste in the middle," said Kent, a professor in OSU's College of Earth, Ocean, and Atmospheric Sciences. "A big glob kind of plops out the top, but in the case of Mount Hood – it doesn't blow the mountain to pieces." 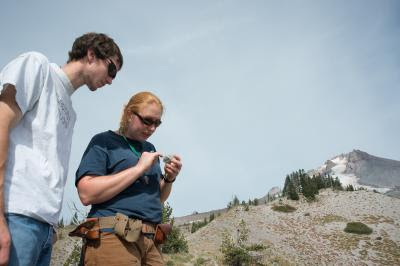 The collaborative study between Oregon State and the University of California, Davis is important because little was known about the physical conditions of magma storage and what it takes to mobilize the magma. Kent and UC-Davis colleague Kari Cooper, also a co-author on the Nature article, set out to find if they could determine how long Mount Hood's magma chamber has been there, and in what condition.

When Mount Hood's magma first rose up through the crust into its present-day chamber, it cooled and formed crystals. The researchers were able to document the age of the crystals by the rate of decay of naturally occurring radioactive elements. However, the growth of the crystals is also dictated by temperature – if the rock is too cold, they don't grow as fast.

Thus the combination of the crystals' age and apparent growth rate provides a geologic fingerprint for determining the approximate threshold for making the near-solid rock viscous enough to cause an eruption. The diffusion rate of the element strontium, which is also sensitive to temperature, helped validate the findings.

"What we found was that the magma has been stored beneath Mount Hood for at least 20,000 years – and probably more like 100,000 years," Kent said. "And during the time it's been there, it's been in cold storage – like the peanut butter in the fridge – a minimum of 88 percent of the time, and likely more than 99 percent of the time."

In other words – even though hot magma from below can quickly mobilize the magma chamber at 4-5 kilometers below the surface, most of the time magma is held under conditions that make it difficult for it to erupt.

"What is encouraging from another standpoint is that modern technology should be able to detect when magma is beginning to liquefy, or mobilize," Kent said, "and that may give us warning of a potential eruption. Monitoring gases, utilizing seismic waves and studying ground deformation through GPS are a few of the techniques that could tell us that things are warming."

The researchers hope to apply these techniques to other, larger volcanoes to see if they can determine their potential for shifting from cold storage to potential eruption, a development that might bring scientists a step closer to being able to forecast volcanic activity.