Crocodiles Climb Trees, Alligators Do It Too

Vladimir Dinets, a research assistant professor in the Department of Psychology, is the first to thoroughly study the tree-climbing and -basking behavior

When most people envision crocodiles, they think of them waddling on the ground or wading in water—not climbing trees. However, a University of Tennessee, Knoxville, study has found that the reptiles can climb trees as far as the crowns.

An American alligator perches on a tree branch in Pearl River Delta, Mississippi. 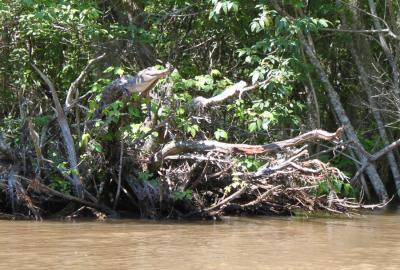 Vladimir Dinets, a research assistant professor in the Department of Psychology, is the first to thoroughly study the tree-climbing and -basking behavior. The research is published in the journal Herpetology Notes and can be found at http://bit.ly/Myi8yr.

Dinets and his colleagues observed crocodile species on three continents—Australia, Africa and North America—and examined previous studies and anecdotal observations. They found that four species climbed trees—usually above water—but how far they ventured upward and outward varied by their sizes. The smaller crocodiles were able to climb higher and further than the larger ones. Some species were observed climbing as far as four meters high in a tree and five meters down a branch.

"Climbing a steep hill or steep branch is mechanically similar, assuming the branch is wide enough to walk on," the authors wrote. "Still, the ability to climb vertically is a measure of crocodiles' spectacular agility on land."

The crocodiles seen climbing trees, whether at night or during the day, were skittish of being recognized, jumping or falling into the water when an approaching observer was as far as 10 meters away. This response led the researchers to believe that the tree climbing and basking are driven by two conditions: thermoregulation and surveillance of habitat.

"The most frequent observations of tree-basking were in areas where there were few places to bask on the ground, implying that the individuals needed alternatives for regulating their body temperature," the authors wrote. "Likewise, their wary nature suggests that climbing leads to improved site surveillance of potential threats and prey."

The data suggests that at least some crocodile species are able to climb trees despite lacking any obvious morphological adaptations to do so.

"These results should be taken into account by paleontologists who look at changes in fossils to shed light on behavior," said Dinets. "This is especially true for those studying extinct crocodiles or other Archosaurian taxa."

Dinets collaborated with Adam Britton from Charles Darwin University in Australia and Matthew Shirley from the University of Florida.

Research by Dinets published in 2013 found another surprising crocodile characteristic—the use of lures such as sticks to hunt prey. More of his crocodile research can be found in his book "Dragon Songs."

Contacts and sources:
Whitney Heins
University of Tennessee at Knoxville
on February 11, 2014