They lived in America about 13,000 years ago where they hunted mammoth, mastodons and giant bison with big spears. The Clovis people were not the first humans in America, but they represent the first humans with a wide expansion on the North American continent – until the culture mysteriously disappeared only a few hundred years after its origin.

Stone and bone tools unearthed from the only known Clovis burial. The site was discovered in 1968, and the tools are found with Clovis boy whose genome reveals a close relationship with all contemporary American Indians.

Photo : Sarah Anzick
Who the Clovis people were and which present day humans they are related to has been discussed intensely and the issue has a key role in the discussion about how the Americas were peopled. Today there exists only one human skeleton found in association with Clovis tools and at the same time it is among the oldest human skeletons in the Americas. It is a small boy between 1 and 1.5 years of age – found in a 12,600 old burial site, called the Anzick Site, in Wilsall, Montana, USA. Now an international team headed by Danish researcher Eske Willerslev has mapped his genome thereby reviving the scientific debate about the colonization of the Americas.

Stone and bone tools unearthed from the only known Clovis burial. The site was discovered in 1968, and the tools are found with Clovis boy whose genome reveals a close relationship with all contemporary American Indians.

Roughly estimated some 80 % of all present-day Native American populations on the two American continents are direct descendants of the Clovis boy's family. The remaining 20 % are more closely related with the Clovis family than any other people on Earth, says Lundbeck Professor Eske Willerslev from the Centre for GeoGenetics at the Natural History Museum of Denmark, University of Copenhagen. T

his surprising result has now been published in the scientific journal Nature. The discovery is so decisive that Nature has chosen to send the article to the press at a later time than usual as they fear the media embargo may be broken. A comprehensive international telephone press conference has been arranged and will be held in the Crow tribe's reservation in Montana – close to where the boy was found. Behind the results are a group of international researchers led by Professor Eske Willerslev from Centre of Excellence in GeoGenetics, Natural History Museum at University of Copenhagen, Denmark.

It is almost like finding the 'missing link' to the common ancestor of the Native Americans. The Clovis boy's family is the direct ancestor to roughly estimated 80 % of all present day Native Americans. Although the Clovis culture disappeared its people are living today. Put simply it is a sensation that we succeeded in finding an approximately 12,600 year old boy whose closest relatives can be regarded as the direct ancestor to so many people, Eske Willerslev says and adds:


View from the top of the hill just above the site.

This also means that Clovis did not descend from Europeans, Asians or Melanesians, a theory that a number of scientists have advocated. They were Native Americans – and the Native American ancestors were the first people in America. This is now a fact.

Shane Doyle, a historian from the Apsaalooke (Crow) tribe, who helped the team with consultations to the Montana tribes agrees:

This discovery by Eske and his team proves something that tribal people have never doubted - we've been here since time immemorial and all the ancient artifacts located within our homelands are remnants from our direct ancestors. But the discovery is only part of the importance of this study. The other part being Eske and his team's respectful commitment to interacting face to face with tribal communities and listening to Native American leaders, which has lead directly to the reburial of this little boy."

Also Sarah Anzick, a molecular biologist in the study and the steward of the remains that were found on private land is excited:

After 46 years since the discovery on my family land, we are finally hearing this child's story through his genetic legacy. I find it remarkable that the descendants of the Clovis culture, which seemed to have vanished 12,600 years ago, are still alive and thriving today.

Interestingly, the teams find that Native American ancestors coming in from Siberia split into two groups. One group is ancestors to the Native Americans presently living in Canada and the other one – which is represented by the Clovis boy – is the ancestor to virtually all Native Americans in South America and Mexico. The US is still a white spot on the map when it comes to genome-wide data from Native Americans. The team members hope to be able to accessing such data in the future to understand the full picture.

An Asian homeland for the First Americans

The first humans came from Siberia via the so-called Beringia Land Bridge, which during the latest ice age connected Siberia with North America and did not bring the Clovis culture with them. The Clovis culture arose after they arrived in America and the boy from Anzick was more a descendant of the first immigrants.

Michael Waters, the key archaeologist connected to the study and who has worked on many Clovis and older sites in North America elaborates:

The genetic findings mesh well with the archaeological evidence to confirm the Asian homeland of the First Americans, more clearly define their genetic heritage, and is consistent with occupation of the Americas a few thousand years before Clovis. The findings do not support a western European origin of the First Americans as suggested by the Solutrean hypothesis. The genetic information provided by the Anzick boy is part of the larger story of modern human dispersal across the Earth and is shedding new light on the last continent to be explored and settled by our species.

Then who were the first immigrants? We don't know. Yet. Maybe a Native American, maybe an ancestor related to the Mal'ta boy from Siberia and another one who was East Asian. We don't know. But our results eliminate all other theories about the origins of the first people in America. The first people in America were the direct ancestors of Native Americans, says Professor Willerslev and continues:

We can see that the Clovis boy shares about 1/3 of his genes with the 24,000 year old child from Mal'ta at the Siberian Lake Baikal who we have analyzed previously. The same goes for all present day Native Americans. Therefore the encounter between East Asians and the Mal'ta group happened before Clovis.

The Mal'ta boy was related to people who later migrated across Beringia to the Americas. 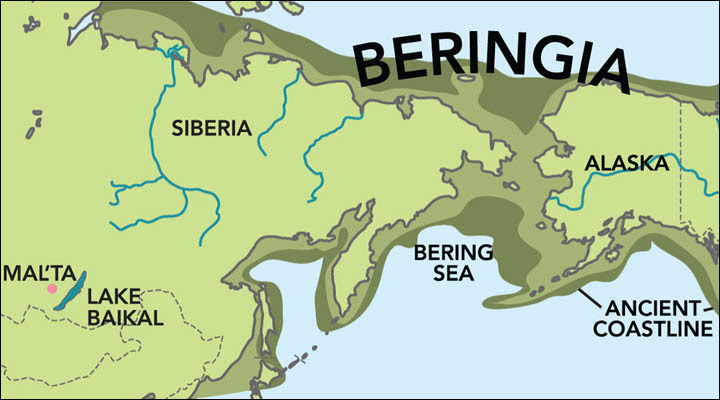 The human remains from the Anzick site will be reburied sometime this year in cooperation with Native American tribes in Montana. Eske Willerslev has in connection with the genome work on the Clovis boy visited several of Montana's Native American tribes with Crow historian Shane Doyle to discuss the findings. All the members of the research team hope that the Anzick study leads to more and enhanced cooperation between Native peoples and scientists. Therefore he has also chosen the Crow reservation in Montana to hold the press conference.

Burial of the MA-1 Mal'ta child redrawn from Gerasimov (1935), with photos of the plaque and swan from the burial and a representative Venus figurine from the excavation.

Credit: Kelly E. Graf
The genome sequence of a 24,000-year-old Siberian individual has provided a key piece of the puzzle in the quest for Native American origins. The ancient Siberian demonstrates genomic signatures that are basal to present-day western Eurasians and close to modern Native Americans. This surprising finding has great consequences for our understanding of how and from where ancestral Native Americans descended, and also of the genetic landscape of Eurasia 24,000 years ago. The breakthrough is reported in this week’s Nature (Advance Online Publication) by an international team of scientists, led by the Centre for GeoGenetics at the Natural History Museum of Denmark (University of Copenhagen).

Clovis culture is named town of Clovis, New Mexico, where in 1930 was the first large and very distinctive spearheads of flint - the so-called Clovis points.

Clovis people is one of the oldest people in America, they supported themselves include by hunting mammoths and mastodons (past elephants), and the culture was spreading quickly across the Americas.

Clovis settlements have been identified in most of the U.S., Mexico and Central America, and there have been many theories as to why the culture suddenly disappeared almost simultaneously with the mammoth and other megafauna  and were replaced by other cultures

Was it the Clovis culture refined hunting techniques that took the lives of the large animals? Or was it disease, a large asteroid impact  or changes in climate.

Contacts and sources:
Eske Willerslev
University of Copenhagen
on February 15, 2014