Orbital Sciences Corporation's Antares rocket launched from Pad 0A at the Wallops Flight Facility, Va. to send the company's Cygnus cargo ship on a its first supply mission to the International Space Station.


Cygnus is delivering 1.5 tons of provisions and experiments to the Expedition 38 crewmembers living on the ISS. 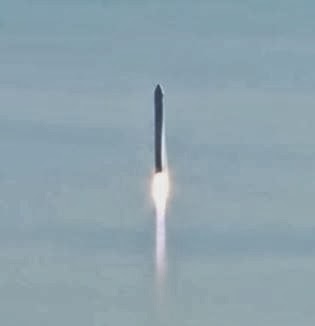 Upon its arrival at the station, Cygnus will be captured with the station's Canadarm2 robotic arm and berthed to the Earth-facing port of the Harmony module, where it will remain for more than a month.

Dozens of new NASA investigations and other science experiments from across the country are headed to the station aboard Orbital Sciences Corp.'s Cygnus spacecraft as part of the agency's commercial partnerships with U.S. aerospace companies.

The Orbital-1 mission began the company's first contracted cargo delivery flight to the station through a $1.9 billion NASA Commercial Resupply Services contract. Orbital will fly at least eight cargo missions to the space station through 2016.

"Today's launch demonstrates how our strategic investments in the American commercial spaceflight industry are helping create new jobs here at home and keep the United States the world leader in space exploration,” NASA Administrator Charles Bolden said. "American astronauts have been living and working continuously in space for the past 13 years on board the International Space Station, and we’re once again sending them supplies launched from U.S. soil. In addition to the supplies, the passion and hard work of many researchers and students are being carried by Cygnus today. I congratulate Orbital and the NASA teams that made this resupply mission possible."

The pressurized Cygnus can accommodate a variety of scientific payloads. The Orbital-1 mission is carrying 2,780 pounds of supplies to the station, not including the weight of packaging materials. This cargo includes vital science experiments, crew provisions, spare parts and other hardware. More than 10,000 students will be involved with 23 experiments they designed. One NASA experiment will study the decreased effectiveness of antibiotics during spaceflight. Another will examine how different fuel samples burn in microgravity, which could inform future design for spacecraft materials.

A portion of the space station had been designated a U.S. National Laboratory, managed by the Center for Advancement of Science in Space (CASIS). CASIS selects and funds new research to use the national lab's unique microgravity environment to conduct experiments not possible on Earth. In one educational experiment selected by CASIS, students will compare how ants' behavior differs in space and on Earth.

Small, relatively inexpensive satellites collectively referred to as CubeSats will provide a variety of technology demonstrations. They will be launched using the NanoRacks Smallsat Deployment Program from the station’s Japanese Experiment Module (JEM) airlock. The NanoRacks CubeSats will be deployed with the JEM Small Satellite Orbital Deployer. ArduSat-2 is a CubeSat built and operated by NanoSatisfi of San Francisco, which will help determine potential commercial applications for CubeSat data collection and commercial off-the-shelf electronics. Testing sensors through this mini-satellite format may help lower the cost of applications that use low-Earth observation techniques.

Cygnus will be grappled at 6:02 a.m. Sunday, Jan. 12, by Expedition 38 Flight Engineer Michael Hopkins of NASA, who will use the station's robotic arm to take hold of the spacecraft. Koichi Wakata of the Japan Aerospace Exploration Agency will support Hopkins in a backup position. Wakata will serve as the primary crew member to berth the spacecraft to the station. NASA's Rick Mastracchio will support him in a backup position. The capsule is scheduled to depart the station in February and burn up during reentry in Earth’s atmosphere.

Orbital Sciences is one of two companies that built and tested new cargo spacecraft under NASA's Commercial Orbital Transportation Services (COTS) program. COTS was completed late last year with an Orbital Sciences demonstration mission to the space station. Space Exploration Technologies (SpaceX), the other company that partnered with NASA under COTS, also is providing commercial resupply services for the agency.

In addition to cargo flights, NASA's commercial space partners are making progress toward a launch of astronauts from U.S. soil within the next three years.

The International Space Station is a convergence of science, technology and human innovation that demonstrates new technologies and makes research breakthroughs not possible on Earth. The space station has been continuously occupied since November 2000. In that time, it has been visited by more than 200 people and a variety of international and commercial spacecraft. The space station remains the springboard to NASA's next great leap in exploration, including future missions to an asteroid and Mars.
on January 09, 2014