According to a new study by researchers at the University of Montreal, nightmares have greater emotional impact than bad dreams do, and fear is not always a factor. In fact, it is mostly absent in bad dreams and in a third of nightmares. What is felt, instead, is sadness, confusion, guilt, disgust, etc. For their analysis of 253 nightmares and 431 bad dreams, researchers obtained the narratives of nearly 10,000 dreams. 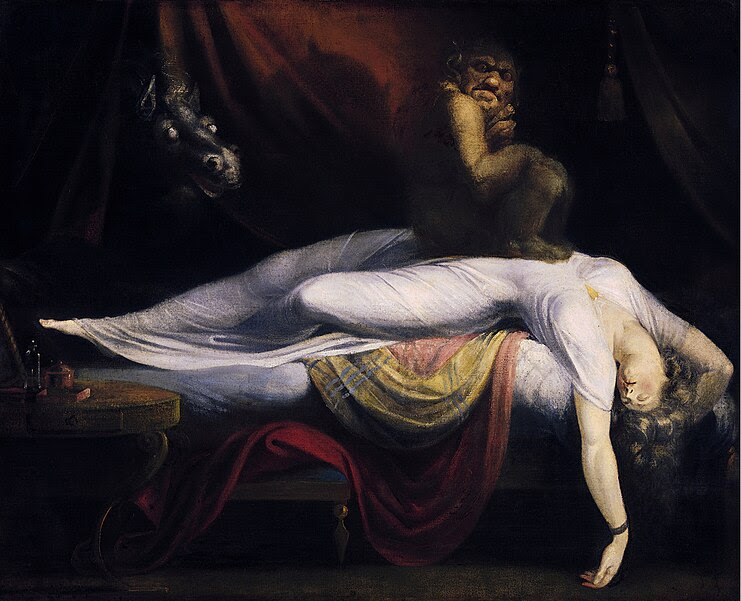 "Physical aggression is the most frequently reported theme in nightmares. Moreover, nightmares become so intense they will wake you up. Bad dreams, on the other hand, are especially haunted by interpersonal conflicts," write Geneviève Robert and Antonio Zadra, psychology researchers at the Université de Montréal, in the last issue of Sleep.

"Death, health concerns and threats are common themes in nightmares," says Geneviève Robert, first author of the article, which formed part of her doctoral thesis. "But it would be wrong to think that they characterize all nightmares. "Sometimes, it is the feeling of a threat or a ominous atmosphere that causes the person to awaken. I'm thinking of one narrative, in which the person saw an owl on a branch and was absolutely terrified."

Nightmares in men were also more likely than those of women to contain themes of disasters and calamities such as floods, earthquakes and war while themes involving interpersonal conflicts were twice as frequent in the nightmares of women.

Why do we dream? What are nightmares? These questions are still unanswered, says Professor Zadra, who has focused on sleep disorders for 20 years (he is notably a specialist in sleepwalking). One hypothesis is that dreams are a catharsis to the vicissitudes of daily life; another is that they reflect a disruption of the nervous system. Whatever they are, the scientific community generally agrees that everyone dreams, usually during the stage of sleep called REM sleep, which most people go through three to five times a night. Most sleepers forget their dreams right away; heavy dreamers remember them more easily. Five to six percent of the population report having nightmares.

The source of a recurring nightmare may be a traumatic event. Returning soldiers sometimes, in their dreams, see the scenes that marked them. Consumption or withdrawal of alcohol or psychotropic drugs may also explain the frequency or intensity of nightmares. The Diagnostic Statistical Manual of Mental Disorders classifies nightmares in the category "parasomnias usually associated with REM sleep."

The good news is that nightmares are treatable. Through visualization techniques, patients learn to change the scenario of one or more of their dreams and repeat the new scenario using a mental imagery technique. It can be through a life-saving act (the dreamer confronts the attacker) or a supernatural intervention (Superman comes to the rescue). All in mid-dream!

One of the research aims of Robert and Zadra, who were funded by the Social Sciences and Humanities Research Council of Canada, was to better understand the difference between bad dreams and nightmares, which seem to be in a continuum with "ordinary" dreams, along a sort of intensity scale.

For this first large-scale comparative study on the topic, the researchers asked 572 respondents to write a dream journal over two to five weeks instead of simply ticking off themes listed in a questionnaire, which is a quicker but less valid method. Some of these journals, stored in a large "dream repository" at the UdeM Department of Psychology, are quite rich.

One example: "I'm in a closet. A strip of white cloth is forcing me to crouch. Instead of clothes hanging, there are large and grotesquely shaped stuffed animals like cats and dogs with grimacing teeth and bulging eyes. They're hanging and wiggling towards me. I feel trapped and frightened."

Not all the narratives are as detailed, says Geneviève Robert, taking several folders from the filing cabinet. While some narratives are written on more than one page (the average is 144 words), some are briefer: one or two lines. Since the participants were asked to write their descriptions as soon as possible after awakening, some of the writing is almost stream-of-consciousness. One can only imagine the work of the research team who transcribed these thousands of narratives before classifying and analyzing them.

What more can we understand from dreams? "Almost everything," says Zadra. Through this research, we can better assert that dreams, bad dreams, and nightmares are part of the same emotional and neurocognitive process. How and which one? It remains to be determined.


Contacts and sources:
Julie Gazaille
University of Montreal
on January 28, 2014