An international group of astrophysicists has found evidence strongly supporting a solution to a long-standing puzzle about the birth of some of the most massive stars in the universe.

Young massive stars, which have more than 10 times the mass of the Sun, shine brightly in the ultraviolet, heating the gas around them, and it has long been a mystery why the hot gas doesn't explode outwards.

This false-color Very Large Array image of the ionized gas in the star forming region Sgr B2 Main was used to detect small but significant changes in brightness of several of the sources. The spots and filaments in this image are regions of ionized gas around massive stars. The changes in brightness detected support a model that could solve a 30-year-old question in high mass star formation. 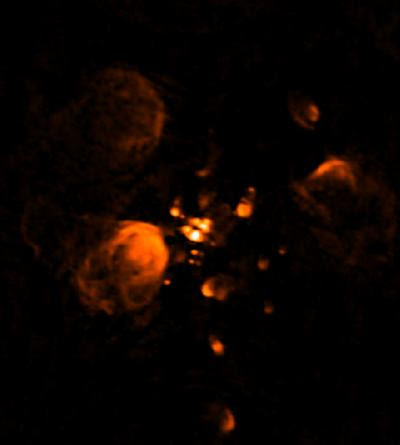 Now, observations made by a team of researchers using the Jansky Very Large Array (VLA), a radio astronomy observatory in New Mexico, have confirmed predications that as the gas cloud collapses, it forms dense filamentary structures that absorb the star's ultraviolet radiation when it passes through them. As a result, the surrounding heated nebula flickers like a candle.

"Massive stars dominate the lives of their host galaxies through their ionizing radiation and supernova explosions," said Mordecai-Mark Mac Low, a curator in the American Museum of Natural History's Department of Astrophysics and an author on the paper. "All the elements heavier than iron were formed in the supernova explosions occurring at the ends of their lives, so without them, life on Earth would be very different."

Stars form when huge clouds of gas collapse. Once the density and temperature are high enough, hydrogen fuses into helium, and the star starts shining. The most massive stars, though, begin to shine while the clouds are still collapsing. Their ultraviolet light ionizes the surrounding gas, forming a nebula with a temperature of 10,000 degrees Celsius. Simple models suggest that at this stage, the gas around massive stars will quickly expand. But observations from the VLA radio observatory show something different: a large number of regions of ionized hydrogen (so-called HII regions) that are very small.
Observations of the massive star forming region Sgr B2 were made with the Karl G. Jansky Very Large Array (VLA) in 1989 and 2012. The VLA has been operational since 1980 and received a major upgrade that was completed in 2011.

"In the old theoretical model, a high-mass star forms and the HII region lights up and begins to expand. Everything was neat and tidy," said lead author Chris De Pree, a professor of astronomy and director of the Bradley Observatory at Agnes Scott College. "But the group of theorists I am working with were running numerical models that showed accretion was continuing during star formation, and that material was continuing to fall in toward the star after the HII region had formed."

Recent modeling has shown that this is because the interstellar gas around massive stars does not fall evenly onto the star but instead forms filamentary concentrations because the amount of gas is so great that gravity causes it to collapse locally. The local areas of collapse form spiral filaments. When the massive star passes through the filaments, they absorb its ultraviolet radiation, shielding the surrounding gas. This shielding explains not only how the gas can continue falling in, but why the ionized nebulae observed with the VLA are so small: the nebulae shrink when they are no longer ionized, so that over thousands of years, they appear to flicker like a candle.

"These transitions from rarefied to dense gas and back again occur quickly compared to most astronomical events," said Dr. Mac Low, a curator in the Museum's Department of Astrophysics. "We predicted that measurable changes could occur over times as short as a few decades."

The new study tested this theory with a 23-year-long experiment. The researchers used VLA observations of the Sagittarius B2 region made in 1989 and again in 2012. This massive star-forming region located near the Galactic center contains many small regions of ionized gas around high-mass stars, providing a large number of candidates for flickering. During this time, four of the HII regions indeed significantly changed in brightness.

"The long term trend is still the same, that HII regions expand with time," De Pree said. "But in detail, they get brighter or get fainter and then recover. Careful measurements over time can observe this more detailed process."