Three NASA science instruments are being prepared for check-out operations aboard the European Space Agency's Rosetta spacecraft, which is set to become the first to orbit a comet and land a probe on its nucleus in November.

Rosetta was reactivated Jan. 20 after a record 957 days in hibernation. U.S. mission managers are scheduled to activate their instruments on the spacecraft in early March and begin science operations with them in August. The instruments are an ultraviolet imaging spectrograph, a microwave thermometer and a plasma analyzer.

Artist’s impression of the Rosetta orbiter at comet 67P/Churyumov–Gerasimenko. (Not to scale.) 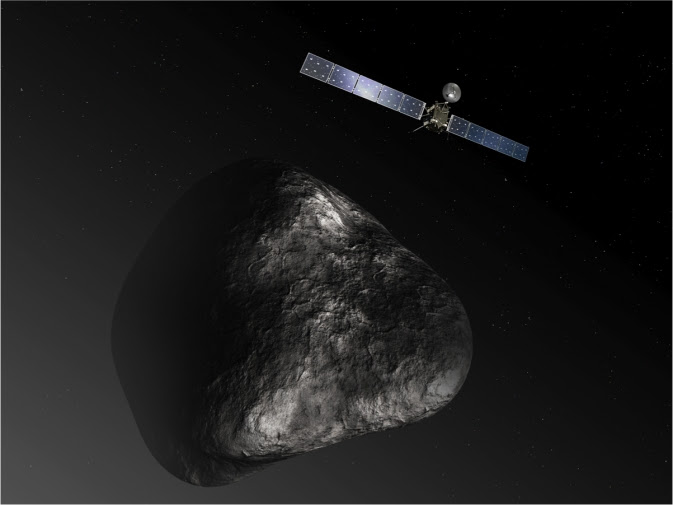 "U.S. scientists are delighted the Rosetta mission gives us a chance to examine a comet in a way we've never seen one before -- in orbit around it and as it kicks up in activity," said Claudia Alexander, Rosetta's U.S. project scientist at NASA's Jet Propulsion Laboratory (JPL) in Pasadena, Calif. "The NASA suite of instruments will provide puzzle pieces the Rosetta science team as a whole will put together with the other pieces to paint a portrait of how a comet works and what it's made of."

Rosetta’s objective is to observe the comet 67P/Churyumov-Gerasimenko up close. By examining the full composition of the comet's nucleus, and the ways in which a comet changes, Rosetta will help scientists learn more about the origin and evolution of our solar system and the role comets may have played in seeding Earth with water, and perhaps even life.

The ultraviolet imaging spectrograph, called Alice, will analyze gases in the tail of the comet, as well as the coma, the fuzzy envelope around the nucleus of the comet. The coma develops as a comet approaches the sun. Alice also will measure the rate at which the comet produces water, carbon monoxide and carbon dioxide. These measurements will provide valuable information about the surface composition of the nucleus. The instrument also will measure the amount of argon present, an important clue about the temperature of the solar system at the time the comet's nucleus originally formed more than 4.6 billion years ago.

The Microwave Instrument for Rosetta Orbiter will identify chemicals on or near the comet's surface and measure the temperature of the chemicals and the dust and ice jetting out from the comet. The instrument also will see the gaseous activity in the tail through coma.

The Ion and Electron Sensor is part of a suite of five instruments to analyze the plasma environment of the comet, particularly the coma. The instrument will measure the charged particles in the sun’s outer atmosphere, or solar wind, as they interact with the gas flowing out from the comet while Rosetta is drawing nearer to the comet's nucleus.

NASA also provided part of the electronics package the Double Focusing Mass Spectrometer, which is part of the Swiss-built Rosetta Orbiter Spectrometer for Ion and Neutral Analysis (ROSINA) instrument. ROSINA will be the first instrument with sufficient resolution to separate two molecules with approximately the same mass: molecular nitrogen and carbon monoxide. Clear identification of nitrogen will help scientists understand conditions at the time the solar system was born.

U.S. science investigators are partnering on several non-U.S. instruments and are involved in seven of the mission's 21 instrument collaborations. NASA has an American interdisciplinary scientist involved in the research. NASA's Deep Space Network (DSN) is supporting the European Space Agency's (ESA's) Ground Station Network for spacecraft tracking and navigation.

Rosetta, composed of an orbiter and lander, is flying beyond the main asteroid belt. Its lander will obtain the first images taken from the surface of a comet, and it will provide the first analysis of a comet's composition by drilling into the surface. Rosetta also will be the first spacecraft to witness, at close proximity, how a comet changes as it is subjected to the increasing intensity of the sun’s radiation.

The potential research and data from the Rosetta mission could help inform NASA's asteroid initiative -- a mission to identify, capture and relocate an asteroid for astronauts to explore. The initiative represents an unprecedented technological feat that will lead to new scientific discoveries and technological capabilities that will help protect our home planet and achieve the goal of sending humans to an asteroid by 2025.

"Future robotic and human exploration missions to Mars, an asteroid and beyond will be accomplished via international partnerships combining worldwide scientific and engineering expertise," said Jim Green, director of NASA's Planetary Science Division in Washington. “Rosetta will provide an opportunity to study a small new world that could inform us on the best ways to approach, orbit, and capture our target asteroid for a future human mission.”

The solar-powered spacecraft was placed into a deep sleep in June 2011, to conserve energy during the portion of its trajectory that carried it past the orbit of Jupiter. During Rosetta's hibernation, all instruments and subsystems were shut off, except for the main computer including a spacecraft clock and a few heaters. ESA mission managers are beginning to commission the spacecraft and its instruments.

"The successful wake-up of Rosetta from its long, lonely slumber is a testament to the teams that built and operate the spacecraft, and the international cooperation between ESA and NASA ensured that we had some of the world's largest deep space dishes available to relay the first signal back to Earth," said Mark McCaughrean, senior scientific advisor in ESA's Directorate of Science and Robotic Exploration. "There is still a lot of work ahead of us before the exciting comet rendezvous, escort, and landing phase, but it's great to be back online."