Scamming nuns. Taking advantage of the mentally disabled. Stealing from the elderly. Just when you think con men couldn’t sink any lower, they do: This time, a group of fraudsters took money from individuals who prepaid their own funerals to ease the financial and emotional burdens on their families.

Recently, a Missouri man and five others were sentenced to federal prison for their role in a Ponzi-like  scheme that victimized some 97,000 customers in more than 16 states. The scheme caused more than $450 million in losses, smaller or non-existent death benefits for families at their most vulnerable, and huge profits that lined the pockets of the defendants. 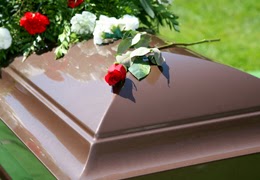 According to the Federal Trade Commission, millions of Americans enter into contracts to prearrange their funerals and prepay some or all of the expenses involved. Laws in individual states regulate the industry, and various states have laws to help ensure that these advance payments are available when they’re needed. However, protections vary widely from state to state, sometimes providing a window of opportunity for unscrupulous operators.

That’s just what happened with James “Doug” Cassity and his Missouri-based company called National Prearranged Services Inc. (NPS). As early as 1992 and until 2008, Cassity and the other defendants employed by NPS or affiliated life insurance companies devised and ran a scheme to defraud purchasers of prearranged funeral contracts obtained from NPS. Also victimized were funeral homes that did business with NPS, financial institutions that served as trustees of the prearranged trusts established by NPS for their customers, and state insurance guarantee associations.

In general, here’s what NPS told its customers: After discussing what the customer wanted, a price would be agreed upon and payment accepted. NPS would make arrangements with the customer-designated funeral home. In accordance with state law, the funds would be placed with a third party—depending on the state, that third party would be a financial institution that would put the funds into a trust that could be only used for safe investments (like government-backed securities)…or a life insurance company that would put the funds into a life insurance policy in the name of the customer.

Here’s what NPS didn’t tell its customers:The company didn’t put all of the funds from customers into a trust or life insurance policy, but instead brazenly altered application documents—i.e., changing deposit amounts, naming itself as a beneficiary, converting whole life insurance policies to term life—and used the money for unauthorized purposes like risky investments, payments for existing funeral claims, and personal enrichment. In some instances, defendants even removed money previously placed in trusts and life insurance policies. And NPS routinely lied to state regulators about its practices.

The complex case—investigated by three federal agencies, a number of state regulatory agencies, and the Department of Justice—began in 2008 when we received information from several state agencies on the shady practices of NPS and one of its affiliated life insurance companies. It ended in November 2013, when six co-conspirators who took advantage of people’s desire to protect their loved ones upon their own deaths were finally brought to justice.

Protect Yourself and Your Loved Ones

Obviously, before you enter into a contract of any kind, make sure you do your due diligence on the other party (get references, check with the Better Business Bureau, etc.)

But here are some additional issues to consider from the Federal Trade Commission before prepaying for funeral goods and services:

- What are you paying for? Are you buying only merchandise, like a casket and vault, or are you purchasing funeral services as well?

- What happens to the money you’ve prepaid? States have different requirements for handling funds paid for prearranged funeral services.

- What happens to the interest income on money that is prepaid and put into a trust account?

- Are you protected if the firm you dealt with goes out of business?

- Can you cancel a contract and get a full refund if you change your mind?

- What happens if you move to a different area or die while away from home? Some prepaid funeral plans can be transferred, but often at an added cost.

- Be sure to tell your family about the plans you’ve made and where your documents are located.
on January 18, 2014