Although few people live in the Western tropical Pacific Ocean region, the remote waters there affect billions of people by shaping climate and air chemistry worldwide.

Next week, scientists will head to the region to better understand its influence on the atmosphere--including how that influence may change in coming decades if storms over the Pacific become more powerful with rising global temperatures.

Scientists working on the CONTRAST project will be in the field this month and next. 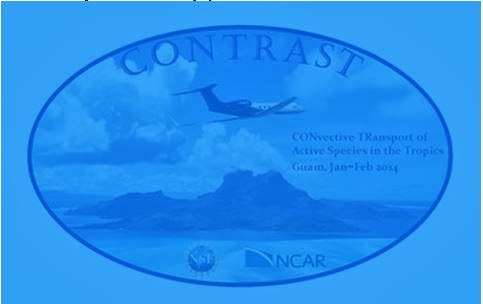 With the warmest ocean waters on Earth, the Western tropical Pacific fuels a sort of chimney whose output has global reach.

The region feeds heat and moisture into huge clusters of thunderstorms that loft gases and particles into the stratosphere, where they spread out over the entire planet and influence climate.

"To figure out the future of the air above our heads, we need to go to the western Pacific," said Laura Pan, a scientist at the National Center for Atmospheric Research (NCAR) and one of the principal investigators on the field project.

"This region has been called the holy grail for understanding global air transport, because so much surface air gets lifted by the storms and then spreads globally."

Ocean surface circulation and winds, including in the Western tropical Pacific. 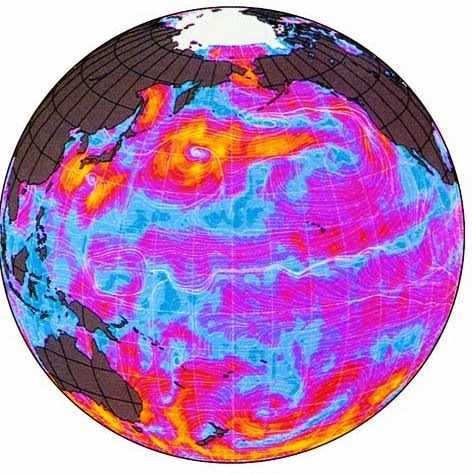 The field project is called CONTRAST (Convective Transport of Active Species in the Tropics). It is funded by the National Science Foundation (NSF), which sponsors NCAR.

CONTRAST, which is based in Guam, is being coordinated with two other field projects in order to give researchers a detailed view of the air masses over the Pacific with a vertical range spanning tens of thousands of feet.

An enormous mass of water in the Western tropical Pacific, the "warm pool," is shown in orange-red. 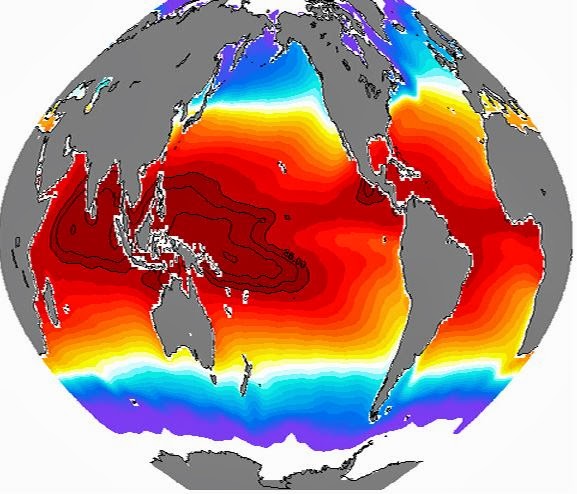 The other, CAST (Coordinated Airborne Studies in the Tropics), is funded by Britain's Natural Environment Research Council Facility and will deploy a BAe146 research aircraft that will focus on air near the ocean surface.

Together, the sensor-laden research flights will provide a comprehensive view of the atmosphere from the ocean surface, where gases produced by marine organisms enter the air, to the stratosphere, more than 60,000 feet above.

"It's a huge region, and that means we have to use multiple aircraft," said University of Maryland's Ross Salawitch, a CONTRAST principal investigator.

"We will attempt to stage these three airplanes in harmony to measure the atmospheric composition over the western Pacific when both ocean biology and atmospheric storms are raging."

As trade winds blow across the tropical Pacific, they push warm water to the west, where it piles up in and near the CONTRAST study region.

The waters around Guam have the world's highest sea surface temperatures in open oceans. They provide heat and moisture to feed clusters of thunderstorms that lift air through the troposphere (the lowest level of the atmosphere) and the tropopause (a cold, shallow region atop the troposphere) and then up into the stratosphere.

Once in the stratosphere--where the air tends to flow horizontally--the gases and particles spread out around the world and linger for years or even decades.

Some of the gases, such as ozone and water vapor, affect the amount of energy from the sun that reaches Earth's surface.

"Research results from CONTRAST will be extremely important for understanding the ozone-depleting effects of certain chemicals, such as short-lived halogen species like those containing chlorine and bromine, in the tropical upper troposphere and lower stratosphere," said Sylvia Edgerton, program director in NSF's Division of Atmospheric and Geospace Sciences.

"It appears that high particle concentrations in the tropical tropopause can increase the ozone-depleting potential of short-lived halogens in the region," said Edgerton.

The amount of these gases in the stratosphere is important for the planet's climate.

Chemicals such as bromine compounds have indirect effects by destroying ozone or otherwise altering the chemistry of the stratosphere. And the gases produced by ocean organisms create a chemical reaction that can be detected in the stratosphere.

"There are so few measurements of atmospheric composition in this important region of the atmosphere that we expect to be able to significantly advance our understanding with the data we will be able to collect during CONTRAST," said Elliot Atlas of the University of Miami, a CONTRAST principal investigator.

As atmospheric patterns evolve and sea surface temperatures warm further due to climate change, the storm clusters over the Pacific are likely to influence climate in ways that are now challenging to anticipate, NCAR's Pan said.

"Understanding the impact of these storms will help us gain ground truth for improving the chemistry-climate models we use to project future climate," she said.

The CONTRAST team will deploy the NSF/NCAR HIAPER aircraft, a Gulfstream V jet modified for advanced research that will fly at altitudes between about 25,000 and 50,000 feet.

Using spectrometers and other instruments on board, the researchers will measure various chemicals and take air samples across a wide region, both in storm clouds and far away from them.

The measurements will be analyzed in conjunction with data from the ATTREX Global Hawk (covering altitudes up to 65,000 feet) and CAST BAe146 (with observations from the ocean surface to about 20,000 feet).

The researchers are planning as many as 16 flights, targeting both towering storms that loft fresh air into the stratosphere as well as collapsed storms to examine the composition of the air that remains lower down, in the troposphere.

State-of-the-art models of atmospheric chemistry will help guide the research flights in the field, as well as aid in subsequent analysis of the observations.
on January 12, 2014