Newfound Planet Is Earth-Mass But Gassy

An international team of astronomers has discovered the first Earth-mass planet that transits, or crosses in front of, its host star. KOI-314c is the lightest planet to have both its mass and physical size measured. Surprisingly, although the planet weighs the same as Earth, it is 60 percent larger in diameter, meaning that it must have a very thick, gaseous atmosphere.

"This planet might have the same mass as Earth, but it is certainly not Earth-like," says David Kipping of the Harvard-Smithsonian Center for Astrophysics (CfA), lead author of the discovery. "It proves that there is no clear dividing line between rocky worlds like Earth and fluffier planets like water worlds or gas giants."

KOI-314c, shown in this artist's conception, is the lightest planet to have both its mass and physical size measured. Surprisingly, although the planet weighs the same as Earth, it is 60 percent larger in diameter, meaning that it must have a very thick, gaseous atmosphere. It orbits a dim, red dwarf star (shown at left) about 200 light-years from Earth. KOI-314c interacts gravitationally with another planet, KOI-314b (shown in the background), causing transit timing variations that allow astronomers to measure the masses of both worlds. This serendipitous discovery resulted from analysis as part of the Hunt for Exomoons with Kepler (HEK) project. 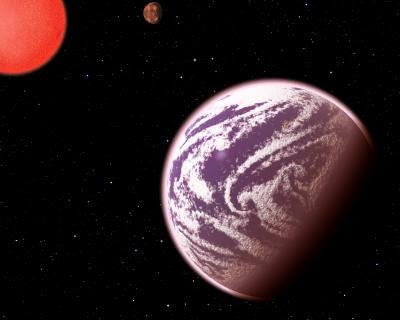 Kipping presented this discovery today in a press conference at the 223rd meeting of the American Astronomical Society.

The team gleaned the planet's characteristics using data from NASA's Kepler spacecraft. KOI-314c orbits a dim, red dwarf star located approximately 200 light-years away. It circles its star every 23 days. The team estimates its temperature to be 220 degrees Fahrenheit, too hot for life as we know it.

KOI-314c is only 30 percent denser than water. This suggests that the planet is enveloped by a significant atmosphere of hydrogen and helium hundreds of miles thick. It might have begun life as a mini-Neptune and lost some of its atmospheric gases over time, boiled off by the intense radiation of its star.

Weighing such a small planet was a challenge. Conventionally, astronomers measure the mass of an exoplanet by measuring the tiny wobbles of the parent star induced by the planet's gravity. This radial velocity method is extremely difficult for a planet with Earth's mass. The previous record holder for a planet with a measured mass (Kepler-78b) weighed 70 percent more than Earth.

To weigh KOI-314c, the team relied on a different technique known as transit timing variations (TTV). This method can only be used when more than one planet orbits a star. The two planets tug on each other, slightly changing the times that they transit their star.

"Rather than looking for a wobbling star, we essentially look for a wobbling planet," explains second author David Nesvorny of the Southwest Research Institute (SwRI). "Kepler saw two planets transiting in front of the same star over and over again. By measuring the times at which these transits occurred very carefully, we were able to discover that the two planets are locked in an intricate dance of tiny wobbles giving away their masses."

The second planet in the system, KOI-314b, is about the same size as KOI-314c but significantly denser, weighing about 4 times as much as Earth. It orbits the star every 13 days, meaning it is in a 5-to-3 resonance with the outer planet.

TTV is a very young method of finding and studying exoplanets, first used successfully in 2010. This new measurement shows the potential power of TTV, particularly when it comes to low-mass planets difficult to study using traditional techniques.

"We are bringing transit timing variations to maturity," adds Kipping.

The planet was discovered by chance by the team as they scoured the Kepler data not for exoplanets, but for exomoons. The Hunt for Exomoons with Kepler (HEK) project, led by Kipping, scans through Kepler's planet haul looking for TTV, which can also be a signature of an exomoon.

"When we noticed this planet showed transit timing variations, the signature was clearly due to the other planet in the system and not a moon. At first we were disappointed it wasn't a moon but then we soon realized it was an extraordinary measurement," says Kipping.