New Era Of Electronics Operating On A Single-Atom Level

New types of solotronic structures, including the world's first quantum dots containing single cobalt ions, have been created and studied at the Faculty of Physics at the University of Warsaw. The materials and elements used to form these structures allow us forecast new trends in solotronics – a field of experimental electronics and spintronics of the future, based on operations occurring on a single-atom level.

Electronic systems operating on the level of individual atoms would seem to be the natural consequence of efforts to achieve ever-greater miniaturization. Already now, we are able to control the behavior of individual atoms by situating them within special semiconductor structures – this is the method used to form quantum dots that contain single magnetic ions. Until recently, only two variants of such structures were known. However, physicists from the Institute of Experimental Physics at the Faculty of Physics at the University of Warsaw (FUW) have successfully created and studied two completely new types of the structures. The materials and elements used in the process make it wholly likely that solotronic devices may come into widespread use in the future.

The results, the Warsaw physicists have just published in Nature Communications, pave the way for developing the field of solotronics.

"Quantum dots are semiconductor crystals on a nanometer scale. They are so tiny that the electrons within them exist only in states with specific energies. As such, quantum dots exhibit similar characteristics to atoms, and – just like atoms – they can be stimulated with light to reach higher energy levels. Conversely, this means they emit light as they return to states with lower energy levels," says Prof. Piotr Kossacki (FUW).
This is a cross-section of the quantum dots developed, constructed and tested by the Institute of Experimental Physics at the Faculty of Physics at the University of Warsaw. The color red marks an ion (cobalt or manganese) with magnetic properties (symbolized by the arrow). Yellow represents a quantum dot (cadmium telluride or indium arsenide, respectively). Blue shows the semiconductor layer securing the quantum dot. 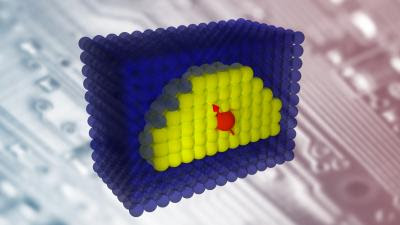 The University laboratory creates quantum dots using molecular beam epitaxy. The process involves precision-heating crucibles containing elements placed in a vacuum chamber. Beams of elements are deposited on the sample. By carefully selecting materials and experimental conditions, the atoms assemble into tiny islands, known as quantum dots. The process is similar to how water vapor condenses on a hydrophobic surface.

While the dots settle, a small quantity of other atoms (for example magnetic ones) can be introduced into the vacuum chamber, with some becoming a part of the emerging dots. Once the sample is removed, it can be examined under a microscope to detect quantum dots containing a single magnetic atom at the center.

"Atoms with magnetic properties disrupt the energy levels of electrons in a quantum dot, which affects how they interact with light. As a result, the quantum dot becomes a detector of such an atom's state. The relationship also works the other way: by changing energy states of electrons in quantum dots, we can affect the respective magnetic atoms," explains Michał Papaj, a student at the UW Faculty of Physics, awarded the Gold Medal in Chemistry during last year's national competition for the best B.Sc. thesis held by the Institute of Physical Chemistry of the Polish Academy of Sciences for his work on quantum dots containing single cobalt ions.

The most powerful magnetic properties are observed in manganese atoms stripped of two electrons (Mn2+). In experiments conducted thus far, the ions have been mounted in quantum dots made of cadmium telluride (CdTe) or indium arsenide (InAs). Using CdTe dots prepared by Dr. Piotr Wojnar at the PAS Institute of Physics, in 2009 Mateusz Goryca from the University of Warsaw demonstrated the first magnetic memory operating on a single magnetic ion.

"It was commonly believed that other magnetic ions, such as cobalt (Co2+), cannot be used in quantum dots. We decided to verify this, and nature gave us a pleasant surprise: the presence of a new magnetic ion turned out not to destroy the properties of the quantum dot," says Jakub Kobak, doctoral student at the University of Warsaw.

Researchers from the University of Warsaw have presented two new systems with single magnetic ions: CdTe quantum dots with a cobalt atom, and cadmium selenide (CdSe) dots with a manganese atom.

Researchers from the Institute of Experimental Physics at the Faculty of Physics at the University of Warsaw have developed, constructed and tested groundbreaking new quantum dots containing single cobalt ions. Here Wojciech Pacuski, Ph.D., is shown with the molecular beam epitaxy device used to construct the quantum dots. 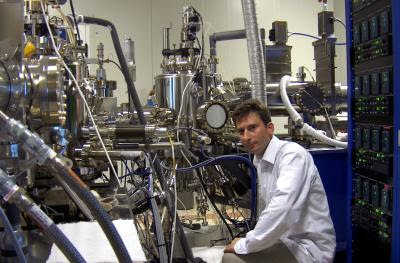 As already stated, manganese atoms exhibit the most powerful magnetic properties. Unfortunately, they are caused by the atomic nucleus as well as the electrons, which means that quantum dots containing manganese ions are complex quantum systems. The discovery made by physicists at the University of Warsaw demonstrates that other magnetic elements – such as chromium, iron and nickel – can be used in place of manganese. These elements do not have nuclear spin, which should make quantum dots that contain them easier to manipulate.

In quantum dots where tellurium is replaced by the lighter selenium, researchers observed that the duration for which information was remembered increased by an order of magnitude. This finding suggests that using lighter elements should prolong the time quantum dots containing single magnetic ions store information, perhaps even by several orders of magnitude.

"We have demonstrated that two quantum systems that were believed not to be viable in fact worked very effectively. This opens up a broad field in our search for other, previously rejected combinations of materials for quantum dots and magnetic ions," concludes Dr. Wojciech Pacuski (FUW).