Winters in Scandinavia were long and cold in the Bronze and Iron Ages, then as now—but a blazing fire was not the only thing to keep people warm. From northwest Denmark, circa 1500–1300 BC, to the Swedish island of Gotland as late as the first century AD, Nordic peoples were imbibing an alcoholic "grog" or extreme hybrid beverage rich in local ingredients, including honey, bog cranberry, lingonberry, bog myrtle, yarrow, juniper, birch tree resin, and cereals including wheat, barley and/or rye—and sometimes, grape wine imported from southern or central Europe.

Ancient Roman imported drinking-set, comprised of a bucket (situla), a ladle and strainer-cup nested together, and several "sauce pans" or drinking cups, from a hoard under the floor of a settlement at Havor (Sweden) in the southern part of the island of Gotland in the Baltic Sea, first century AD. Biomolecular archaeological analyses of the residue in the perforations and interior of the strainer-cup showed that imported wine, spiced with pine and birch resins, was enjoyed by Nordic people. 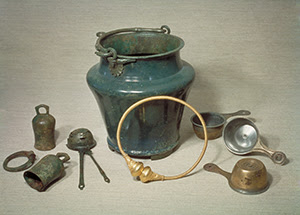 Such is the conclusion based on new archaeochemical evidence derived from samples inside pottery and bronze drinking vessels and strainers from four sites in Demark and Sweden, combined with previous archaeobotanical data.

The research ("A biomolecular archaeological approach to 'Nordic grog'") was recently published online in the Danish Journal of Archaeology (Dec. 23, 2013). Patrick E. McGovern, Scientific Director of the Biomolecular Archaeology Project at the University of Pennsylvania Museum of Archaeology and Anthropology and author of Uncorking the Past: The Quest for Wine, Beer and Other Alcoholic Beverages (University of California Press, 2009) is the lead author on the paper, which was researched and written in collaboration with colleagues Gretchen R. Hall (University of Pennsylvania Museum) and Armen Mirzoian (Scientific Services Division, Alcohol and Tobacco Tax and Trade Bureau [TTB], US Treasury), with key samples and archaeological evidence provided by Scandinavian colleagues.

The new biomolecular archaeological evidence provides concrete evidence for an early, widespread, and long-lived Nordic grog tradition, one with distinctive flavors and probable medicinal purposes—and the first chemically attested evidence for the importation of grape wine from southern or central Europe as early as 1100 BC, demonstrating both the social and cultural prestige attached to wine, and the presence of an active trading network across Europe—more than 3,000 years ago.

"Far from being the barbarians so vividly described by ancient Greeks and Romans, the early Scandinavians, northern inhabitants of so-called Proxima Thule, emerge with this new evidence as a people with an innovative flair for using available natural products in the making of distinctive fermented beverages," noted Dr. McGovern. "They were not averse to adopting the accoutrements of southern or central Europeans, drinking their preferred beverages out of imported and often ostentatiously grand vessels. They were also not averse to importing and drinking the southern beverage of preference, grape wine, though sometimes mixed with local ingredients."

Young woman, believed to be a priestess, buried in an oak trunk coffin under a mound at Egtved in Jutland, Denmark, close by and contemporaneous with the warrior burial at Nandrup (ca. 1500–1300 BC). A birch-bark bucket, which has been shown by archaeobotanical evidence to contain "Nordic grog," lies at her feet.

To reach their conclusions, the researchers obtained ancient residue samples from four sites in a 150-mile radius of southern Sweden and encompassing Denmark. The oldest, dated 1500–1300 BC, was from Nandrup in northwestern Denmark, where a warrior prince had been buried in an oak coffin with a massively hafted bronze sword, battle-ax, and pottery jar whose interior was covered with a dark residue that was sampled. A second Danish sample, dated to a later phase of the Nordic Bronze Age from about 1100–500 BC, came from a pit hoard at Kostræde, southwest of Copenhagen. A brownish residue filling a perforation of a bronze strainer, the earliest strainer yet recovered in the region, was sampled.

A third Danish sample was a dark residue on the interior base of a large bronze bucket from inside a wooden coffin of a 30-year-old woman, dating to the Early Roman Iron Age, about 200 BC, at Juellinge on the island of Lolland, southwest of Kostræde. The bucket was part of a standard, imported Roman wine-set, and the woman held the strainer-cup in her right hand. A reddish-brown residue filling the holes and interior of a strainer-cup, again part of imported Roman wine-set, provided the fourth sample. Dating to the first century AD, the strainer-cup was excavated from a hoard, which also included a large gold torque or neck ring and a pair of bronze bells, at Havor on the Swedish island of Gotland in the Baltic Sea.

A Tradition and a Revival

According to Dr. McGovern, the importation of southern wine, now proven to have begun, if only as a trickle in the late second millennium BC, grew apace—and eventually eclipsed the grog tradition—but never completely. Many of the ingredients in Nordic grog went on to be consumed in birch beer and as the principal bittering agents (so-called gruit) of medieval beers, before hops gained popularity, and the German purity law (Reinheitsgebot) which limited ingredients of beer to barley, hops and water was enacted in Bavaria in 1516 and eventually became the norm in northern Europe.

"About the closest thing to the grog today is produced on the island of Gotland in the Baltic Sea," the site of the latest residue sample, Dr. McGovern noted. "You can taste Gotlandsdryka in farmhouses. It's made from barley, honey, juniper, and other herbs like those in the ancient version."

"This new evidence of an old tradition resonates with modern inhabitants of Scandinavia, where alcoholic beverages are very much enjoyed and seen as an intrinsic part of Nordic and Viking lore. The story goes that a particularly wise creature named Kvasir was created by two races of gods, the Æsir and the Vanir, by spitting into a large jar. Kvasir was later murdered by two dwarfs, who ran his blood into three huge vessels containing honey. The result was a mixed beverage that conferred the gift of wisdom and poetry to the drinker. Odin himself, the Norse high god, was able to steal the grog back by consuming the beverage, transforming himself into an eagle, and flying back to Valhalla, the Nordic warrior paradise." 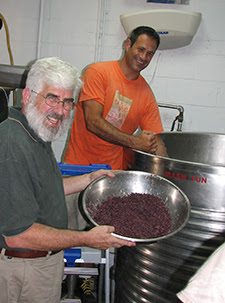 New this winter, the Delaware-based Dogfish Head Craft Brewery, in collaboration with Dr. McGovern, re-created their version of the ancient Nordic grog. It is the latest in the celebrated Ancient Ale Series, begun in 2000 with Midas Touch. Appropriately called Kvasir, it is a hybrid barley and winter wheat beer, lingonberry and bog cranberry wine, and honey mead--all rolled into one and seasoned with bog myrtle, yarrow, clover, and birch syrup. A second version of this extreme hybrid beverage was also collaboratively brewed in Spring 2013 at the Nynäshamns Ångbryggeri on the east coast of Sweden, right across from the island of Gotland. Called Arketyp, it is now available in the state stores (Systembolaget) there.

The Dogfish Head version of the Nordic grog has a somewhat sour, toasty wheat taste profile, comparable to a Belgian lambic and in keeping with the relative scarcity of sugar-rich resources in the far north. Dogfish Head offersdetails.

"Both versions of the grog will marry nicely with the new Nordic cuisine, with its emphasis on natural ingredients," said Dr. McGovern.

About the Penn Museum

The Penn Museum (the University of Pennsylvania Museum of Archaeology and Anthropology) is dedicated to the study and understanding of human history and diversity. Founded in 1887, the Museum has sent more than 400 archaeological and anthropological expeditions to all the inhabited continents of the world. With an active exhibition schedule and educational programming for children and adults, the Museum offers the public an opportunity to share in the ongoing discovery of humankind's collective heritage.

Contacts and sources:
Pam Kosty
University of Pennsylvania
on January 16, 2014