An exceptionally close stellar explosion discovered on Jan. 21 has become the focus of observatories around and above the globe, including several NASA spacecraft. The blast, designated SN 2014J, occurred in the galaxy M82 and lies only about 12 million light-years away. This makes it the nearest optical supernova in two decades and potentially the closest type Ia supernova to occur during the life of currently operating space missions.

As befits its moniker, Swift was the first to take a look. On Jan. 22, just a day after the explosion was discovered, Swift's Ultraviolet/Optical Telescope (UVOT) captured the supernova and its host galaxy.

Before and After Images:  These Swift UVOT images show M82 before (left) and after the new supernova (right). The pre-explosion view combines data taken between 2007 and 2013. The view showing SN 2014J (arrow) merges three exposures taken on Jan. 22, 2014. Mid-ultraviolet light is shown in blue, near-UV light in green, and visible light in red. The image is 17 arcminutes across, or slightly more than half the apparent diameter of a full moon. 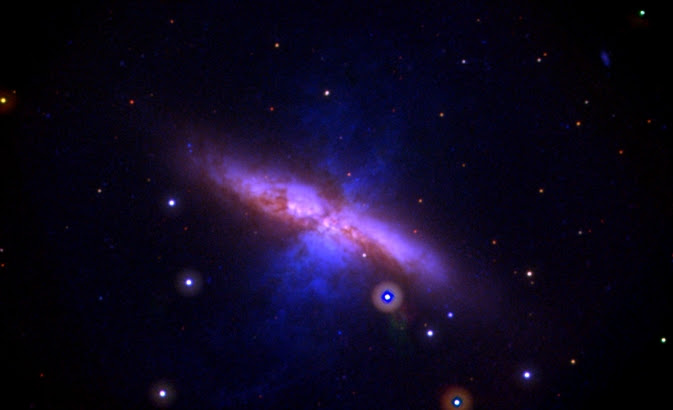 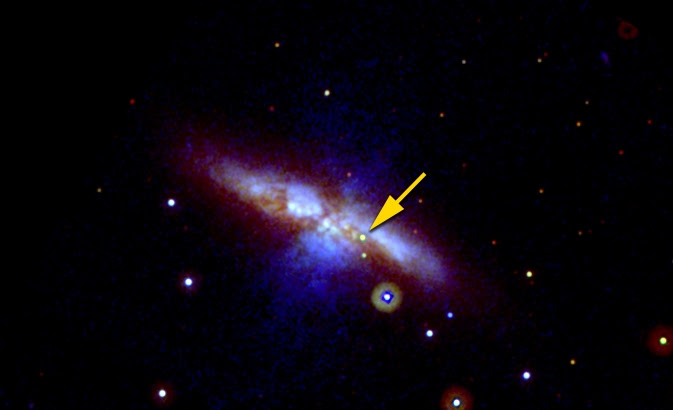 Remarkably, SN 2014J can be seen on images taken up to a week before anyone noticed its presence. It was only when Steve Fossey and his students at the University of London Observatory imaged the galaxy during a brief workshop that the supernova came to light.

"Finding and publicizing new supernova discoveries is often the weak link in obtaining rapid observations, but once we know about it, Swift frequently can observe a new object within hours," said Neil Gehrels, the mission's principal investigator at NASA's Goddard Space Flight Center in Greenbelt, Md.

Although the explosion is unusually close, the supernova's light is attenuated by thick dust clouds in its galaxy, which may slightly reduce its apparent peak brightness.

"Interstellar dust preferentially scatters blue light, which is why Swift's UVOT sees SN 2014J brightly in visible and near-ultraviolet light but barely at all at mid-ultraviolet wavelengths," said Peter Brown, an astrophysicist at Texas A&M University who leads a team using Swift to obtain ultraviolet observations of supernovae.

However, this super-close supernova provides astronomers with an important opportunity to study how interstellar dust affects its light. As a class, type Ia supernovae explode with remarkably similar intrinsic brightness, a property that makes them useful "standard candles" -- some say "standard bombs" -- for exploring the distant universe.

Brown notes that X-rays have never been conclusively observed from a type Ia supernova, so a detection by Swift's X-ray Telescope, Chandra or NuSTAR would be significant, as would a Fermi detection of high-energy gamma rays.

A type Ia supernova represents the total destruction of a white dwarf star by one of two possible scenarios. In one, the white dwarf orbits a normal star, pulls a stream of matter from it, and gains mass until it reaches a critical threshold and explodes. In the other, the blast arises when two white dwarfs in a binary system eventually spiral inward and collide.

Either way, the explosion produces a superheated shell of plasma that expands outward into space at tens of millions of miles an hour. Short-lived radioactive elements formed during the blast keep the shell hot as it expands. The interplay between the shell's size, transparency and radioactive heating determines when the supernova reaches peak brightness. Astronomers expect SN 2014J to continue brightening into the first week of February, by which time it may be visible in binoculars.

M82, also known as the Cigar Galaxy, is located in the constellation Ursa Major and is a popular target for small telescopes. M82 is undergoing a powerful episode of star formation that makes it many times brighter than our own Milky Way galaxy and accounts for its unusual and photogenic appearance.