Ingredients In Chocolate, Tea And Berries Could Guard Against Diabetes

Eating high levels of flavonoids including anthocyanins and other compounds (found in berries, tea, and chocolate) could offer protection from type 2 diabetes - according to research from the University of East Anglia (UEA) and King's College London.

Findings published today in the Journal of Nutrition reveal that high intakes of these dietary compounds are associated with lower insulin resistance and better blood glucose regulation.

Eating high levels of flavonoids including anthocyanins and other compounds (found in berries, tea, and chocolate) could offer protection from type 2 diabetes -- according to research from the University of East Anglia and King's College London. High intakes of these dietary compounds are associated with lower insulin resistance and better blood glucose regulation. A study of almost 2,000 people also found that these food groups lower inflammation which, when chronic, is associated with diabetes, obesity, cardiovascular disease, and cancer. 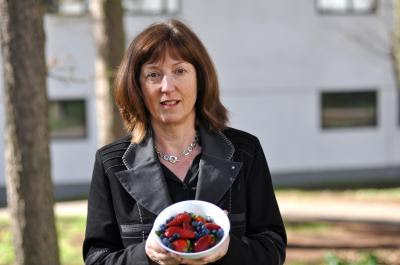 A study of almost 2,000 people also found that these food groups lower inflammation which, when chronic, is associated with diabetes, obesity, cardiovascular disease, and cancer.

Prof Aedin Cassidy from UEA's Norwich Medical School led the research. She said: "Our research looked at the benefits of eating certain sub-groups of flavanoids. We focused on flavones, which are found in herbs and vegetables such as parsley, thyme, and celery, and anthocyanins, found in berries, red grapes, wine and other red or blue-coloured fruits and vegetables.

"This is one of the first large-scale human studies to look at how these powerful bioactive compounds might reduce the risk of diabetes. Laboratory studies have shown these types of foods might modulate blood glucose regulation – affecting the risk of type 2 diabetes. But until now little has been know about how habitual intakes might affect insulin resistance, blood glucose regulation and inflammation in humans."

Researchers studied almost 2,000 healthy women volunteers from TwinsUK who had completed a food questionnaire designed to estimate total dietary flavonoid intake as well as intakes from six flavonoid subclasses. Blood samples were analysed for evidence of both glucose regulation and inflammation. Insulin resistance, a hallmark of type 2 diabetes, was assessed using an equation that considered both fasting insulin and glucose levels.

"We found that those who consumed plenty of anthocyanins and flavones had lower insulin resistance. High insulin resistance is associated with Type 2 diabetes, so what we are seeing is that people who eat foods rich in these two compounds – such as berries, herbs, red grapes, wine– are less likely to develop the disease.

"We also found that those who ate the most anthocyanins were least likely to suffer chronic inflammation – which is associated with many of today's most pressing health concerns including diabetes, obesity, cardiovascular disease, and cancer.

"And those who consumed the most flavone compounds had improved levels of a protein (adiponectin) which helps regulate a number of metabolic processes including glucose levels.

"What we don't yet know is exactly how much of these compounds are necessary to potentially reduce the risk of type 2 diabetes," she added.

Prof Tim Spector, research collaborator and director of the TwinsUK study from King's College London, said: "This is an exciting finding that shows that some components of foods that we consider unhealthy like chocolate or wine may contain some beneficial substances. If we can start to identify and separate these substances we can potentially improve healthy eating. There are many reasons including genetics why people prefer certain foods so we should be cautious until we test them properly in randomised trials and in people developing early diabetes."

'Intakes of Anthocyanins and Flavones Are Associated with Biomarkers of Insulin Resistance and Inflammation in Women' by Jennings A, Welch AA, Spector T, Macgregor A, and Cassidy A, is published in the Journal of Nutrition on Monday, January 20, 2014.