Like lifting a giant veil, the near-infrared vision of NASA's Hubble Space Telescope uncovers a dazzling new view deep inside the Tarantula Nebula. Hubble reveals a glittering treasure trove of more than 800,000 stars and protostars embedded inside the nebula.

This huge Hubble Space Telescope mosaic, spanning a width of 600 light-years, shows a star factory of more the 800,000 stars being born. The stars are embedded inside the Tarantula Nebula. 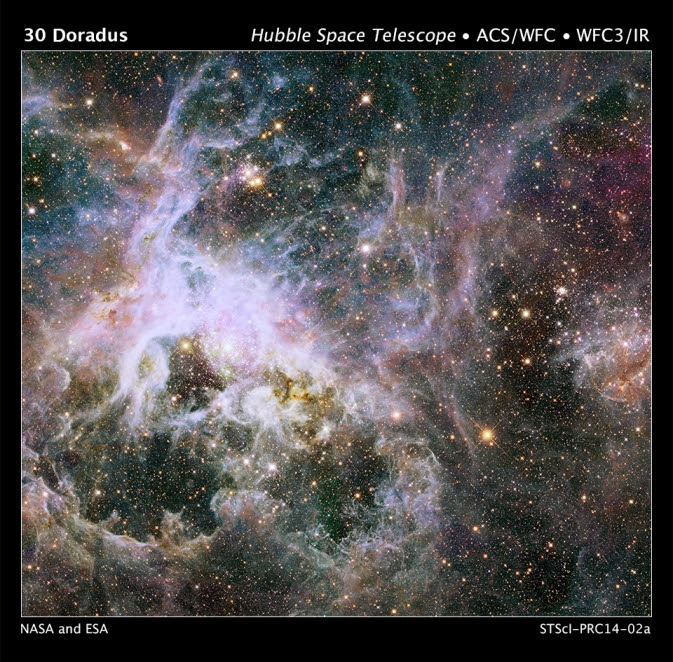 These observations were obtained as part of the Hubble Tarantula Treasury Program.

When complete, the program will produce a large catalog of stellar properties, which will allow astronomers to study a wide range of important topics related to star formation.

This near-infrared view reveals newly formed stars that are often embedded in clouds of dust, and only the near-infrared light can pass through these clouds.

The first results from this program have been published in the Astronomical Journal and are being presented at the 223rd meeting of the American Astronomical Society at National Harbor, Md.

Also known as 30 Doradus, the Tarantula Nebula is a raucous region of star birth that resides 170,000 light-years away in the Large Magellanic Cloud, a small, satellite galaxy of our Milky Way.

Because it contains the nearest observable super-cluster of stars, the nebula is a nearby laboratory for seeing close-up a firestorm of star birth that was much more common in the early universe. Hubble can resolve individual stars and many red protostars as well as aging red giants and supergiants, giving astronomers new insights into the stars' birth and evolution.

Because of the mosaic's exquisite detail and sheer breadth, astronomers can follow how episodes of star birth migrate across the region in space and time.

Star formation in the Tarantula Nebula started tens of millions of years ago, though it was not confined to a specific region. Instead, as enough gas accumulated, pockets of star birth burst to life erratically, like the finale of a fireworks show.

"Because of the mosaic's exquisite detail and sheer breadth, we can follow how episodes of star birth migrate across the region in space and time," said Elena Sabbi, an astronomer at the Space Telescope Science Institute in Baltimore, Md., and the principal investigator of the observing team.

The new infrared Hubble mosaic is revealing a multitude of pockets of star formation.

These regions will likely merge into larger clusters.

The Tarantula Nebula's vigorous star birth may be fueled partly by gas stripped from a small nearby galaxy, the Small Magellanic Cloud. One question researchers hope to answer is whether supermassive stars always form in clusters, or whether they can be born in isolation.