Himiko, Mysterious Space Blob From The Dawn Of Time

The Subaru Telescope, an 8.2-meter telescope operated by the National Astronomical Observatory of Japan, has been combing the night sky since 1999. Located at the Mauna Kea Observatories in Hawaii, the telescope has been systematically surveying each degree of space, whether it looks promising or not, in search of objects worthy of further investigation. One of the most fascinating objects to emerge from the Subaru Telescope's wide-field survey—Himiko—was discovered in 2009.

Himiko, a "space blob" named after a legendary queen from ancient Japan, is a simply enormous galaxy, with a hot glowing gaseous halo extending over 55,000 light-years. Not only is Himiko very large, it is extraordinarily distant, seen at a time approximately 800 million years after the Big Bang, when the universe was only 6 percent of its present size and stars and galaxies were just beginning to form.

A composite color image of Himiko based on Hubble, Subaru, and Spitzer data. On the left is a Hubble image with the position of Himiko marked with a square. Top right is a close-up view of Himiko from Hubble showing infrared light captured at 0.98, 1.25, and 1.6 microns, and represented by blue, green, and red, respectively. Bottom right is a combination of Hubble, Subaru, and Spitzer images: the Hubble infrared bands are green, Lyman alpha emission is blue, and infrared 3.6 micron is red. 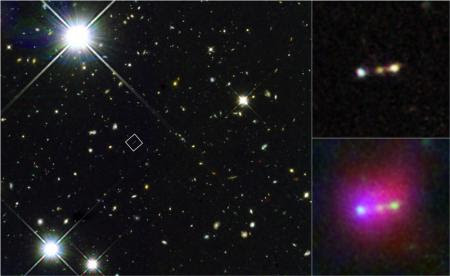 How could such an early galaxy have sufficient energy to power such a vast glowing gas cloud? In search of the answer to this question, Richard Ellis, the Steele Family Professor of Astronomy at Caltech, together with colleagues from the University of Tokyo and the Harvard-Smithsonian Center for Astrophysics, undertook an exploration of Himiko using the combined resources of the Hubble Space Telescope and the new Atacama Large Millimeter/submillimeter Array (ALMA) in Chile's Atacama Desert. The data collected through these observations answered the initial question about the source of energy powering Himiko, but revealed some puzzling data as well.

The Hubble images, receiving optical and ultraviolet light, reveal three stellar clumps covering a space of 20,000 light-years. Each clump is the size of a typical luminous galaxy dating to the epoch of Himiko. Together, the clumps achieve a prodigious rate of star formation, equivalent to about one hundred solar masses per year. This is more than sufficient to explain the existence of Himiko and its gaseous halo. The observation of the three stellar clumps is exciting in itself, as it means that Himiko is a "triple merger," which, according to Ellis, is "a remarkably rare event."

But a surprising anomaly emerged when Himiko was observed by ALMA. Although the giant gas cloud was bustling with energy at ultraviolet and optical frequencies, it was comparatively sleepy in the submillimeter and radio ranges that ALMA detects. Ordinarily, intense star formation creates dust clouds that are composed of elements such as carbon, oxygen, and silicon, which are heavy in comparison to the hydrogen and helium of the early universe. When these dust clouds are heated up by the ultraviolet light emitted by the developing stars, the dust reradiates the ultraviolet light out into the universe at radio wavelengths. But ALMA did not receive significant radio signals from Himiko, suggesting that heavier elements are not present. Also missing was the spectral signature associated with the emission of gaseous carbon, something also common in galaxies with intense star formation.

Both of these nondetections—of substantial radio waves and of gaseous carbon—are perplexing since carbon is ordinarily rapidly synthesized in young stars. Indeed, carbon emission has heretofore been recommended as a tracer of star formation in distant galaxies. But, as Ellis and his fellow astronomers found, Himiko does not contain the dust clouds of heavier elements that astronomers find in typical energetic galaxies. Instead its interstellar gas is composed of hydrogen and helium—primitive materials formed in the Big Bang itself.

Ellis and his fellow astronomers did not come to this conclusion quickly. They first carefully ruled out several other possible explanations for Himiko, including that the giant blob is being created by the magnification of a foreground object by a phenomenon known as gravitational lensing, or is being powered by a massive black hole at its center. Ultimately, the team concluded that Himiko is most likely a primordial galaxy caught in the moment of its formation between 400 million to 1 billion years after the Big Bang, a period astronomers term the cosmic dawn.

"Astronomers are usually excited when a signal from an object is detected," Ellis says, "but in this case it's the absence of a signal from heavy elements that is the most exciting result!"

The paper reporting the results of this research, titled "An Intensely Star-Forming Galaxy at Z ~ 7 with Low Dust and Metal Content Revealed by Deep ALMA and HST Observations," will be published in the December 1, 2013, issue of the Astrophysical Journal. The work was funded by NASA through a grant from the Space Telescope Science Institute, the World Premier International Research Center Initiative (WPI Initiative), and the Japan Society for the Promotion of Science (JSPS).

Contacts and sources:
Written by Cynthia Eller
California Institute of Technology
on January 16, 2014