Archaeologists working at the southern Egyptian site of Abydos have discovered the tomb of a previously unknown pharaoh: Woseribre Senebkay—and the first material proof of a forgotten Abydos Dynasty, ca. 1650–1600 BC. Working in cooperation with Egypt's Supreme Council of Antiquities, a team from the Penn Museum, University of Pennsylvania, discovered king Senebkay's tomb close to a larger royal tomb, recently identified as belonging to a king Sobekhotep (probably Sobekhotep I, ca. 1780 BC) of the 13th Dynasty.

Team members work to excavate the burial chamber of the pharaoh Woseribre Senebkay, with sheets covering a painted wall decoration 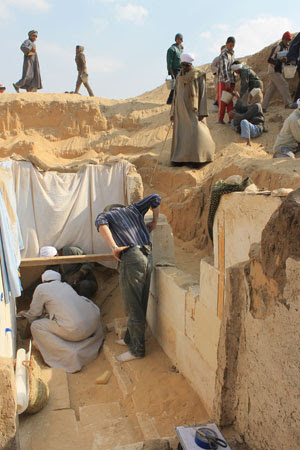 The discovery of pharaoh Senebkay's tomb is the culmination of work that began during the summer of 2013 when the Penn Museum team, led by Dr. Josef Wegner, Egyptian Section Associate Curator of the Penn Museum, discovered a huge 60-ton royal sarcophagus chamber at South Abydos. The sarcophagus chamber, of red quartzite quarried and transported to Abydos from Gebel Ahmar (near modern Cairo), could be dated to the late Middle Kingdom, but its owner remained unidentified. Mysteriously, the sarcophagus had been extracted from its original tomb and reused in a later tomb—but the original royal owner remained unknown when the summer season ended.

In the last few weeks of excavations, fascinating details of a series of kings' tombs and a lost dynasty at Abydos have emerged. Archaeologists now know that the giant quartzite sarcophagus chamber derives from a royal tomb built originally for a pharaoh Sobekhotep—probably Sobekhotep I, the first king of Egypt's 13th Dynasty. Fragments of that king's funerary stela were found just recently in front of his huge, badly robbed tomb. A group of later pharaohs (reigning about a century and a half later during Egypt's Second Intermediate Period) were reusing elements from Sobekhotep's tomb for building and equipping their own tombs. One of these kings (whose name is still unknown) had extracted and reused the quartzite sarcophagus chamber. Another king's tomb found just last week is that of the previously unknown pharaoh: Woseribre-Senebkay.

A Lost Pharaoh and a Forgotten Dynasty

The newly discovered tomb of pharaoh Senebkay dates to ca. 1650 BC during Egypt's Second Intermediate Period. The identification was made by Dr. Wegner and Kevin Cahail, Ph.D. student, Department of Near Eastern Languages and Civilizations, University of Pennsylvania. The tomb of Senebkay consists of four chambers with a decorated limestone burial chamber. The burial chamber is painted with images of the goddesses Nut, Nephthys, Selket, and Isis flanking the king's canopic shrine. Other texts name the sons of Horus and record the king's titulary and identify him as the "king of Upper and Lower Egypt, Woseribre, the son of Re, Senebkay." 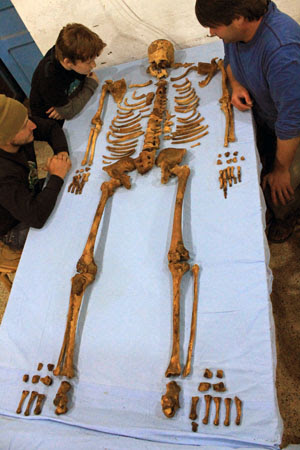 Senebkay's tomb was badly plundered by ancient tomb robbers who had ripped apart the king's mummy as well as stripped the pharaoh's tomb equipment of its gilded surfaces. Nevertheless, the Penn Museum archaeologists recovered the remains of king Senebkay amidst debris of his fragmentary coffin, funerary mask, and canopic chest. Preliminary work on the king's skeleton of Senebkay by Penn graduate students Paul Verhelst and Matthew Olson (of the Department of Near Eastern Languages and Civilizations) indicates he was a man of moderate height, ca. 1.75 m (5'10), and died in his mid to late 40s.

The discovery provides significant new evidence on the political and social history of Egypt's Second Intermediate Period. The existence of an independent "Abydos Dynasty," contemporary with the 15th (Hyksos) and 16th (Theban) Dynasties, was first hypothesized by Egyptologist K. Ryholt in 1997. The discovery of pharaoh Senebkay now proves the existence of this Abydos dynasty and identifies the location of their royal necropolis at South Abydos in an area anciently called Anubis-Mountain. The kings of the Abydos Dynasty placed their burial ground adjacent to the tombs of earlier Middle Kingdom pharaohs including Senwosret III (Dynasty 12, ca. 1880–1840 BC), and Sobekhotep I (ca. 1780 BC).

There is evidence for about 16 royal tombs spanning the period ca. 1650–1600 BC. Senebkay appears to be one of the earliest kings of the "Abydos Dynasty." His name may have appeared in a broken section of the famous Turin King List (a papyrus document dating to the reign of Ramses II,ca. 1200 BC) where two kings with the throne name "Woser...re" are recorded at the head of a group of more than a dozen kings, most of whose names are entirely lost.

The tomb of pharaoh Senebkay is modest in scale. An important discovery was the badly decayed remains of Senebkay's canopic chest. This chest was made of cedar wood that had been reused from the nearby tomb of Sobekhotep I and still bore the name of that earlier king, covered over by gilding. Such reuse of objects from the nearby Sobekhotep tomb by Senebkay, like the reused sarcophagus chamber found during the summer, provides evidence that suggests the limited resources and isolated economic situation of the Abydos Kingdom which lay in the southern part of Middle Egypt between the larger kingdoms of Thebes (Dynasties 16–17) and the Hyksos (Dynasty 15) in northern Egypt. Unlike these numbered dynasties, the pharaohs of the Abydos Dynasty were forgotten to history and their royal necropolis unknown until this discovery of Senebkay's tomb.

"It's exciting to find not just the tomb of one previously unknown pharaoh, but the necropolis of an entire forgotten dynasty," noted Dr. Wegner. "Continued work in the royal tombs of the Abydos Dynasty promises to shed new light on the political history and society of an important but poorly understood era of Ancient Egypt."

Abydos and the Penn Museum

Penn Museum scholars have been excavating at the site of Abydos since 1967, as part of the Pennsylvania-Yale-Institute of Fine Arts/NYU Expedition to Abydos. Abydos is located on the western side of the Nile in Upper Egypt and was a religious center associated with the veneration of the funerary god Osiris. Dr. Josef Wegner has been excavating at the site of Abydos since 1994. Excavations in the area of South Abydos have revealed a thriving royal cult center that developed around the subterranean tomb of pharaoh Senwosret III located at the area called Anubis-Mountain.

The Penn Museum (the University of Pennsylvania Museum of Archaeology and Anthropology) in Philadelphia is dedicated to the study and understanding of human history and diversity. Founded in 1887, the Museum has sent more than 300 archaeological and anthropological expeditions to all the inhabited continents of the world. With an active exhibition schedule and educational programming for children and adults, the Museum offers the public an opportunity to share in the ongoing discovery of humankind's collective heritage. Information: www.penn.museum.

Contacts and sources:
Pam Kosty
University of Pennsylvania
on January 16, 2014