The first of the analyzed figures, depicting a bovid, belongs to the Levantine art practiced by the nomadic hunters-gatherers who inhabited the Iberian Peninsula about 10,000 years ago. On the other hand, the second figure, depicting a quadruped, has a schematic style, developed by the first producers, farmers and stockbreeders who lived in the area between 6,500 and 3,500 years ago. The first style is characterized by the naturalism of its shapes and scenes, while the second outlines its reasons, sometimes even reaching abstraction. 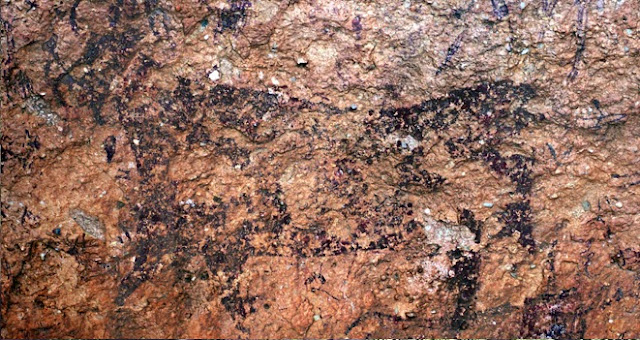 The artists used iron oxides and terrigenous as pigments. These materials are easily found in the environment of the analyzed shelters: the Abrigo Grande de Minateda, the most emblematic to define the origin and evolution of rock art in the Mediterranean Basin of the Iberian Peninsula, and the Abrigo del Barranco de la Mortaja.

Alberto Jorge, CSIC researcher at the National Museum of Natural Sciences, states: "The compositions of the pigments used in both styles, separated by several millenniums in time, are identical, which means that the artists did not turn to intentioned recipes as it was previously thought. The truth is that it is an abundant and good-quality pigmenting material that was easy to find nearby".

Another conclusion of the work has implications in the research methodology of the pigments of rock art outdoors. The presence of calcium oxalate would prove that pigment and carrier merged with the outer layer over the centuries. Jorge explains: "This result would question the studies conducted so far, based on distinguishing three stratigraphic layers – surface, pigment and patina-, as these are continuously merged and altered, which introduces a clear random factor in the dating". Researchers have also detected the presence of certain fatty acids, which would suggest that when pigments were processed, applied or stored, could come into contact with animal skins.

CSIC researcher adds: "From now on, we need to be very cautious when we talk about rituals in the preparation of pigments, as these interpretations came up when substances such as calcium phosphates, interpreted as charred and crushed bones, were found in the pigments. These extrapolations are not correct since we also found these substances in the rocky substrate itself".