By studying the star around which the planet revolves, they found that the star's rotation appears to be well-aligned with the planetary movement. The object can be well-studied because the star is relatively bright, it can be seen if strong binoculars are used. The planet orbits one star of what appears to be a binary star, and the orbit is not circular but slightly eccentric.  This is an artist impression of the star Kepler-410A. The black dot represents the planet Kepler-410A b, as it moves in front of the star, blocking a small part of the star light and thereby allowing it to be indirectly detected. The stellar companion Kepler-410B is about 10,000 times further away from the planet and is not shown on the image. 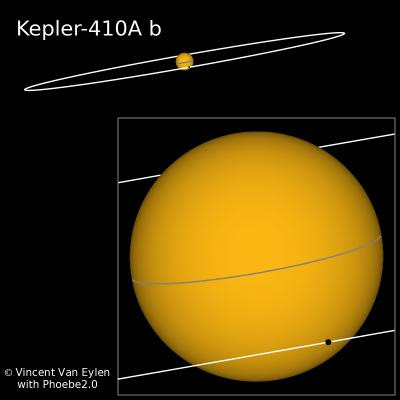 The planet is a bit larger than our Earth, with a radius of about 2.8 times that of our planet. With a period of around 18 days, it is much closer to its star than Earth is to our sun, and therefore unlikely to be suitable for life due to its high temperature. Perturbations on the discovered planet indicate that there is likely another, as of yet unknown planet in the system.

After the first discovery of the first exoplanet (a planet around which doesn't orbit our Sun, but another star), the number of planets has increased up to around 1000 currently known exoplanets. Kepler-410A b is interesting because it can be studied in detail. It has been observed for four years with the Kepler space telescope, a NASA satellite which has monitored the brightness of more than 150.000 stars simultaneously, to look for small regularly-recurring dips in the light, which are indicative of the presence of an exoplanet.

The exquisite quality of the Kepler data has allowed a very detailed study of the host star. On top of that, the star is rather bright; it is in fact the third brightest exoplanet host star discovered by Kepler. This has allowed the team to study tiny variations in the stellar brightness caused by stellar pulsations, a technique which is called asteroseismology. Thereby they have been able to measure stellar properties such as its mass and radius to an accuracy of a few percent.

"Ultimately, to understand anything about exoplanets, we need to understand the stars they revolve around. In this case, asteroseismology has even allowed us to measure the inclination angle of the star. We now know we are looking at the equator of the star, not at the pole. This can be compared with the orbit of the planet to learn about planetary formation. The star is around 2.7 giga-years old and is a little larger than the Sun. We will never be able to go there, as it is located at around 425 lightyears from Earth," says lead author Vincent Van Eylen.

Because of the brightness of the star, it is a suitable target for further observations. The team has accurately measured the times of transit and found it doesn't cross the star exactly every 17.8 days, but is slightly perturbed: the planet is sometimes up to 15 minutes late or early. These perturbations indicate that there could be another planet present, slightly pulling or pushing Kepler-410A b around.

"We are confident that there is another planet, but because it doesn't move in front of the star, we don't yet know what it is like," says Vincent Van Eylen.

The findings are published in Astrophysical Journal. The international team consists of 15 people from 7 different universities. Lead author Vincent Van Eylen is a PhD student at Aarhus University in Denmark, and he is also associated to the KU Leuven. The work originates from his master project, which he undertook in Aarhus as part of an Erasmus exchange year.