Researchers from the Baryon Oscillation Spectroscopic Survey (BOSS) have announced that they have measured the distances to galaxies more than six billion light-years away to an unprecedented accuracy of just one percent. Their measurements place new constraints on the properties of the mysterious "dark energy" thought to permeate empty space, which causes the expansion of the Universe to accelerate.

"There are not many things in our daily lives that we know to one-percent accuracy," said David Schlegel, a physicist at Lawrence Berkeley National Laboratory (LBNL) and the principal investigator of BOSS. "I now know the size of the Universe better than I know the size of my house."
An artist's concept of the latest, highly accurate measurement of the Universe from BOSS. The spheres show the current size of the "baryon acoustic oscillations" (BAOs) from the early universe, which have helped to set the distribution of galaxies that we see in the universe today. Galaxies have a slight tendency to align along the edges of the spheres — the alignment has been greatly exaggerated in this illustration. BAOs can be used as a "standard ruler" (white line) to measure the distances to all the galaxies in the universe. 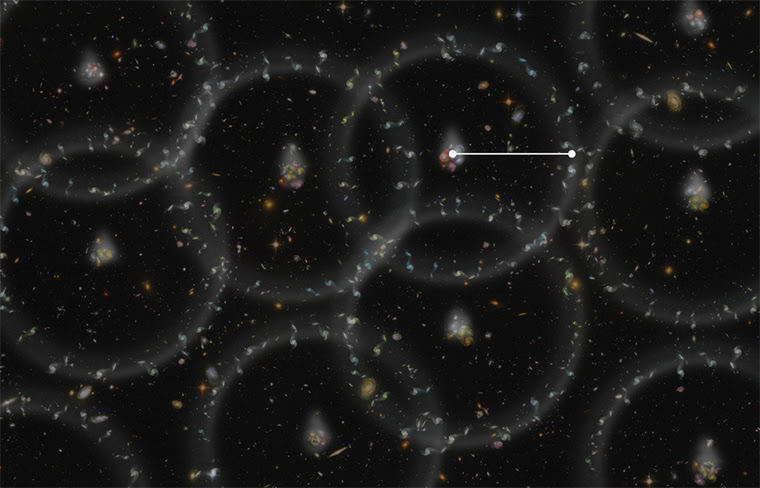 The new distance measurements were presented today at the meeting of the American Astronomical Society by Harvard University astronomer Daniel Eisenstein, the director of the Sloan Digital Sky Survey III (SDSS-III), the worldwide collaboration of which BOSS is a part. They are detailed in a series of articles submitted to journals by the BOSS collaboration last month, all of which are now available as online preprints.

"Determining distance is a fundamental challenge of astronomy," said Eisenstein. "You see something in the sky — how far away is it? Once you know how far away it is, learning everything else about it is suddenly much easier."

Throughout history, astronomers have met this challenge using many different techniques: for example, distances to planets in the Solar System can be measured quite accurately using radar, but for more distant objects, astronomers must turn to less-direct methods. Regardless of the method, every measurement has some uncertainty, which can be expressed as a percentage of the thing being measured — for example, if you measure the distance from Washington to New York (200 miles) to within 2 miles of the true value, you have measured to an accuracy of 1%.

Only a few hundred stars and a few star clusters are close enough to have distances measured to one-percent accuracy. Nearly all of these stars are only a few thousand light-years away, and all are still within our own Milky Way galaxy. Reaching out a million times farther away, the new BOSS measurements probe far beyond our Galaxy to map the Universe with unprecedented accuracy.

With these new, highly-accurate distance measurements, BOSS astronomers are making new inroads in the quest to understand dark energy. "We don't yet understand what dark energy is," explained Eisenstein, "but we can measure its properties. Then, we compare those values to what we expect them to be, given our current understanding of the Universe. The better our measurements, the more we can learn."

Making a one-percent measurement at a distance of six billion light-years requires a completely different technique from measurements in the Solar System or the Milky Way. BOSS, the largest of the four projects that make up the Sloan Digital Sky Survey III (SDSS-III), was built to take advantage of this technique: measuring the so-called "baryon acoustic oscillations" (BAOs), subtle periodic ripples in the distribution of galaxies in the cosmos.

These ripples are imprints of pressure waves that moved through the early Universe, which was so hot and dense that particles of light (photons) moved along with the protons and neutrons (known collectively as "baryons") that today make up the nuclei of atoms. The original size of these ripples is known, and their size today can be measured by mapping galaxies.

"With these galaxy measurements, nature has given us a beautiful ruler," said Ashley Ross, an astronomer from the University of Portsmouth. "The ruler happens to be half a billion light years long, so we can use it to measure distances precisely, even from very far away."

Making these measurements required astronomers to map the locations of 1.2 million galaxies. BOSS uses a specialized instrument that can make detailed measurements of 1000 galaxies at a time. "On a clear night when everything goes perfectly, we can add more than 8000 galaxies and quasars to the map," said Kaike Pan, who leads the team of observers at the SDSS-III's Sloan Foundation 2.5-meter Telescope at Apache Point Observatory in New Mexico.

The BOSS team presented preliminary BAO measurements from its early galaxy maps a year ago, but the new analysis covers an area more than twice as large, and thus provides a much more precise measurement. The new dataset also includes the first BAO measurements from a sample of nearby galaxies. "Making these measurements at two different distances allows us to see how the expansion of the Universe has changed over time, which will help us understand why it is accelerating," explained University of Portsmouth astronomer Rita Tojeiro, who co-chairs the BOSS galaxy clustering working group along with Jeremy Tinker of New York University.

Mariana Vargas-Magaña, a postdoctoral researcher at Carnegie Mellon University, led a companion paper that investigates many of the subtle effects that could influence the BOSS measurement. "When you're trying to reach one percent, you have to be paranoid about everything that could go even slightly wrong," said Vargas-Magaña — for example, slight differences in how galaxies were identified could have thrown off the entire measurement of their distribution, so different parts of the sky had to be checked carefully. "Fortunately," Vargas-Magaña said, "there are plenty of careful people on our team to check our assumptions. By the time all of them are satisfied, we are sure we didn't miss anything."

For now, the BOSS measurements appear consistent with a form of dark energy that stays constant through the history of the Universe. This "cosmological constant" is one of just six numbers needed to make a model that matches the shape and large-scale structure of the Universe. Schlegel likens this six-number model to a pane of glass, which is pinned in place by bolts that represent different measurements of the history of the Universe. "BOSS now has one of the tightest of those bolts, and we just gave it another half-turn," said Schlegel. "Each time you ratchet up the tension and the glass doesn't break, that's a success of the model."