Thousands of honey bees in Australia are being fitted with tiny sensors as part of a world-first research program to monitor the insects and their environment using a technique known as 'swarm sensing'.

The research is being led by CSIRO and aims to improve honey bee pollination and productivity on farms as well as help understand the drivers of bee Colony Collapse Disorder (CCD), a condition decimating honey bee populations worldwide.

Up to 5,000 sensors, measuring 2.5mm x2.5mm are being fitted to the backs of the bees in Hobart, Tasmania, before being released into the wild. It's the first time such large numbers of insects have been used for environmental monitoring. 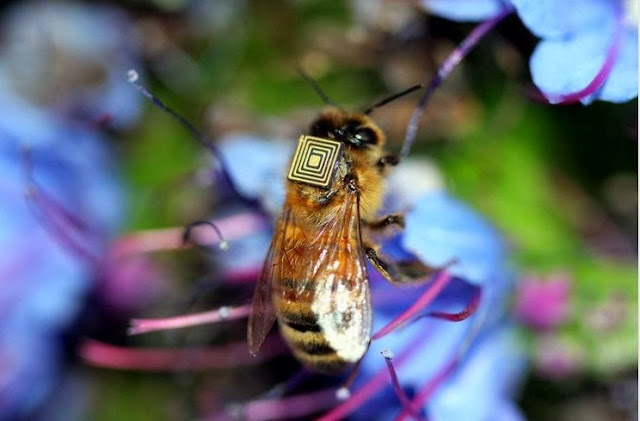 "Honey bees play a vital role in the landscape through a free pollination service for agriculture, which various crops rely on to increase yields. A recent CSIRO study showed bee pollination in Faba beans can lead to a productivity increase of 17%," CSIRO science leader Dr Paulo de Souza, who leads the swarm sensing project, said.

"Around one third of the food we eat relies on pollination, but honey bee populations around the world are crashing because of the dreaded Varroa mite and Colony Collapse Disorder. Thankfully, Australia is currently free from both of those threats."

The research will also look at the impacts of agricultural pesticides on honey bees by monitoring insects that feed at sites with trace amounts of commonly used chemicals. 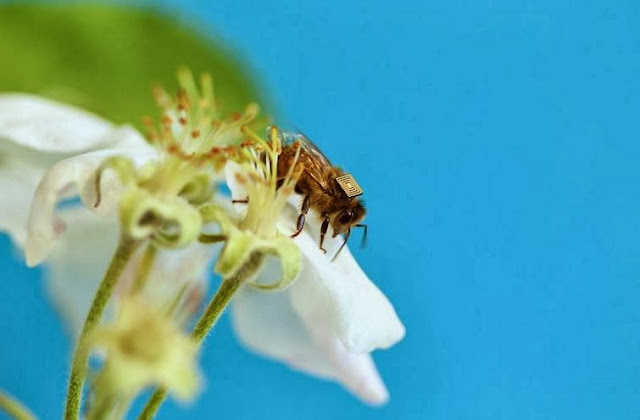 "Using this technology, we aim to understand the bee's relationship with its environment. This should help us understand optimal productivity conditions as well as further our knowledge of the cause of colony collapse disorder," Dr de Souza said.

The sensors are tiny Radio Frequency Identification sensors that work in a similar way to a vehicle's e-tag, recording when the insect passes a particular checkpoint. The information is then sent remotely to a central location where researchers can use the signals from the 5,000 sensors to build a comprehensive three dimensional model and visualise how these insects move through the landscape.

"Bees are social insects that return to the same point and operate on a very predictable schedule. Any change in their behaviour indicates a change in their environment. If we can model their movements, we'll be able to recognise very quickly when their activity shows variation and identify the cause. This will help us understand how to maximise their productivity as well as monitor for any biosecurity risks," Dr de Souza said.

Understanding bee behaviour will give farmers and fruit growers improved management knowledge enabling them to increase the benefit received from this free pollination service. It will also help them to gain and maintain access to markets through improving the way we monitor for pests.

"We're working with the University of Tasmania, Tasmanian Beekeepers Association, local beekeepers in Hobart and fruit growers around the state to trial the technology. Many growers rely on wild bees or the beekeepers to provide them with pollinators so they can improve their crops each year. Understanding optimal conditions for these insects will improve this process," Dr de Souza said.

To attach the sensors, the bees are refrigerated for a short period, which puts them into a rest state long enough for the tiny sensors to be secured to their backs with an adhesive. After a few minutes, the bees awaken and are ready to return to their hive and start gathering valuable information.

"This is a non-destructive process and the sensors appear to have no impact on the bee's ability to fly and carry out its normal duties," Dr de Souza said.

The next stage of the project is to reduce the size of the sensors to only 1mm so they can be attached to smaller insects such as mosquitoes and fruit flies.

Varroa Mite
Varroa mites are external parasites of bees. The mites, which are about the size of a pinhead, use specialised mouthparts to attack developing bee larvae or adult bees, resulting in deformed bees, reduced lifespan and ultimately the destruction of the colony or hive. These mites are the most important pest of honeybees around the world.