When the temperature rises on Baffin Island, in the Canadian high Arctic, ancient Polytrichum mosses, trapped beneath the ice for thousands of years, are exposed. Using radiocarbon dating, new research in Geophysical Research Letters has calculated the age of relic moss samples that have been exposed by modern Arctic warming. Since the moss samples would have been destroyed by erosion had they been previously exposed, the authors suggest that the temperatures in the Arctic now must be warmer than during any sustained period since the mosses were originally buried. 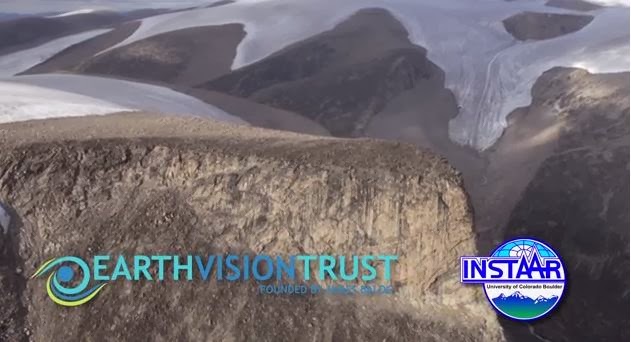 The authors collected 365 samples of recently exposed biological material from 110 different locations, cutting a 1000 kilometer long transect across Baffin Island, with samples representing a range of altitudes. From their samples the authors obtained 145 viable measurements through radiocarbon dating. They found that most of their samples date from the past 5000 years, when a period of strong cooling overtook the Arctic. However, the authors also found even older samples which were buried from 24,000 to 44,000 years ago.

The records suggest that in general, the eastern Canadian Arctic is warmer now than in any century in the past 5000 years, and in some places, modern temperatures are unprecedented in at least the past 44,000 years. The observations, the authors suggest, show that modern Arctic warming far exceeds the bounds of historical natural variability.

“The great time these plants have been entombed in ice, and their current exposure, is the first direct evidence that present summer warmth in the Eastern Canadian Arctic now exceeds the peak warmth there in the Early Holocene era”, said Gifford Miller, from the University of Colorado. “Our findings add additional evidence to the growing consensus that anthropogenic emissions of greenhouse gases have now resulted in unprecedented recent summer warmth that is well outside the range of that attributable to natural climate variability.”