New kind of see-through screen could be applied as a thin plastic coating on ordinary glass.

Transparent displays have a variety of potential applications — such as the ability to see navigation or dashboard information while looking through the windshield of a car or plane, or to project video onto a window or a pair of eyeglasses. A number of technologies have been developed for such displays, but all have limitations.

Now, researchers at MIT have come up with a new approach that can have significant advantages over existing systems, at least for certain kinds of applications: a wide viewing angle, simplicity of manufacture, and potentially low cost and scalability.

The innovative system is described in a paper published this week in the journal Nature Communications, co-authored by MIT professors Marin Soljačić and John Joannopoulos, graduate student Chia Wei Hsu, and four others.

Picture the Louvre pyramid: the iconic glass pyramid that serves as main entrance and skylight to the landmark museum. The pyramid is illuminated at night, creating a magical ambience. Imagine strolling next to it while a video about the museum is projected on the glass in front of you, adding information while preserving the elegance of the structure. This seems like a scene taken from The Avengers or other sci-fi movies: although some technology for transparent displays exists, in practice it has many limitations.  The basic principle for the new transparent projection screen: nanoparticles that interact with a single color (in this case blue) are incorporated into a transparent material. The result is a material that lets most of the ambient light go through and therefore appears transparent; however, by using a laser projector that sends a blue light beam of the specific color that is scattered by the embedded nanoparticles, one can obtain a high-resolution projected image. 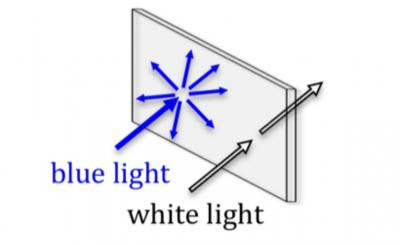 Using the 20 thousand square feet of glass of the Louvre pyramid as a transparent display with existing methods would be expensive and difficult. Closer to home, one could wish to have a simple method to use a storefront glass, or a subway window as a projection screen.

A team from the MIT and Harvard departments of Physics, and the US Army Edgewood Chemical Biological Center, has developed a new approach to produce transparent projection screens. Their result paves the way for a new class of transparent displays with many attractive features, including wide viewing angle, scalability to large size, and low cost.

White light is composed of all the colors of the rainbow. A white projector screen looks white because all the colors of the ambient light interact with it and get reflected. On the other hand, a window appears transparent because the same ambient light doesn't interact with glass and is free to go through. This is also the reason why you cannot project onto a regular glass: the light that you are trying to project simply passes through. One can envision the components of a material to be like tennis players, and the light to be like tennis balls of different colors. A material that looks white is made up of players that intercept light-balls of all colors and hit them back; a clear glass is made up by players that do not hit any at all.

The result is a material that lets most of the ambient light go through and therefore appears transparent; however, by using a laser projector that sends a light beam of the specific color that is scattered by the embedded nanoparticles, one can obtain a high-resolution projected image. As a proof of concept the research team developed a screen that interacts preferentially with blue light. Coincidentally, Prof Soljacic started to think about transparent projection screens while gazing at the blue ocean --- the source of many of his good ideas.

From paper to lab

Hsu performed the theoretical design and optimization, and together with Zhen fabricated a sample. "We wanted to create a transparent screen sensitive to the blue light of a laser projector" says Hsu "To this extent we used nanoparticles that scattered the same hue of blue as the laser in the projector. The resonance wavelength, the interaction color of a nanoparticle, can be tuned to arbitrary colors. We picked silver based nanoparticles because they are common and because they perform better than other metals".

The group mixed silver nanoparticles of the diameter of 62 nanometers (about as long as your fingernail grows in a minute) with a water-soluble transparent polymer. They poured the solution into a frame and let it dry at room temperature, obtaining a screen of 25x25 centimeters (about 10x10 inches) and around 0.5 millimeters thick (two hundredths of an inch). "The apparent color and brightness seem to be those of regular glass," comments Zhen, "but the show begins when we project blue light. Look at our figure 2, the projection of the MIT logo is clearly visible on our screen, unlike regular glass."

Red, green, and blue (RGB) are additive primary colors, meaning that, as far as the human eye is concerned, one can obtain any other color by superposing light of these three. A standard projector sends an intense light beam that reproduces a colorful image by combining RGB; a laser projector is like a coach who throws plenty of red, green and blue tennis balls in a given pattern to an array of players, and the players hit back balls of all colors.
A demonstration of the new display technology shows a series of blue circles projected onto a transparent polymer screen embedded with silver nanoparticles. The MIT mugs show the clarity of the screen.

"We are excited about our transparent display, but we are already thinking of the next challenges," adds Prof. Soljacic. "In principle, we could implement a full-color display by embedding three types of nanoparticles each scattering selectively red, green and blue. Alternatively, one could design a single nanoparticle with multiple resonances, like a tennis player who hits specific RGB balls, but the difficulty there lies in maintaining high transparency away from the selected red, green, and blue."

Projecting into the future

Transparent screens have innumerable applications, from showing navigation data on car windshields and aircraft cockpit windows, to projecting information and figures on glass windows and eyeglasses, to advertising and retail.

As Prof. John Joannopoulos points out, "A variety of transparent displays have been developed for specific applications and are already in commerce, but each of them has some limitations. Our design has several attractive features that could make it a suitable option in many fields." Existing head-up displays used in navigation systems have a narrow viewing angle that limits the position of the viewer. Diffusive screens can cover large surfaces: they use light scattering but no color selectivity and therefore look "hazy," less transparent. Electronic flat-panel displays with transparent electronics are difficult to scale to large size.

Fluorescent screens, usable in principle in storefront glass windows or similar large surfaces, are difficult to make at high efficiency. "There is growing interest in transparent displays and our approach could serve many purposes," says Hsu, "our display is very transparent and easily scalable to large size; the projection has very high resolution and is visible from a wide angle; the design is efficient and has low production and maintenance cost. We spent less than ten dollars to build our sample!"

The resonant nanoparticle scattering technique has potential to lead to new developments and applications such as flexible and scrollable displays, 3D transparent screens, and peel-and-stick projection foils. "Think of all the surfaces covered by windows," concludes Prof Soljacic with a visionary air, "it is a lot of space that is not fully used: when I stroll downtown and look at the glass of skyscrapers at night, or at the subway windows, I imagine all that we can project on them."

This work was funded by the Army Research Office through the Institute for Soldier Nanotechnologies and by the National Science Foundation (Materials Research Science and Engineering Centers).