Why Do We Age? Science Has No Explanation

Despite aging being one the hottest topic in the media recently, scientists have no coherent explanation for it. New demographic data on humans, animals and plants for the first time unveil such an extraordinary diversity of aging processes that no existing evolutionary theory can account for. Both life spans and mortalities vary from species to species.

The fact that the probability of dying rises with age applies to humans, but is not principally true. This is shown by a catalogue of 46 species with their respective mortality and fertility rates, which has now been published in the science journal Nature. It is the result of a long-term data collection project led by scientists at the Max Planck Institute for Demographic Research (MPIDR) in Rostock, Germany, and at the Max-Planck Odense Center on the Biodemography of Aging (MaxO) in Odense, Denmark. 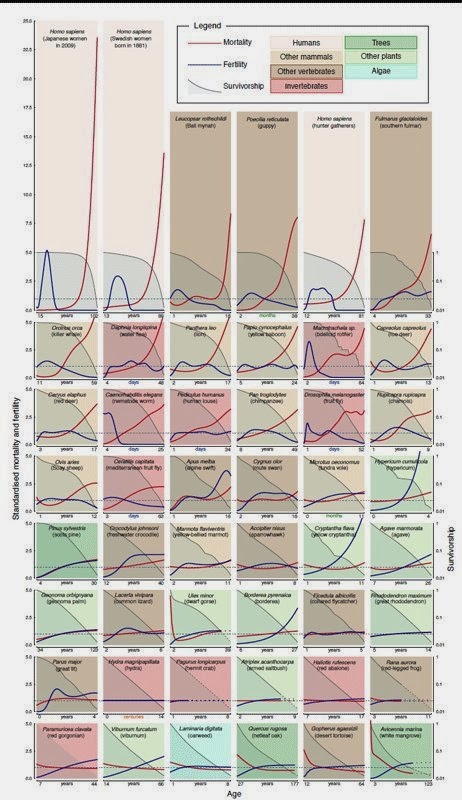 Not only are previous explanations unable to deal with life spans ranging from a few days (fruit fly), to decades (humans), to centuries (hydra), but they are also unable to account for variations in the death rate. Common theories assert that the probability of dying rises with age, as for humans. However, the researchers cataloged species such as the white mangrove and the desert tortoise whose probability of dying actually decreases with age. In addition, fertility periods of some species also challenge common theories.

Previous attempts to explain aging claim that creatures only invest in self-preservation until they have reproduced successfully and raised their offspring. Following this line of reasoning, when the end of the fertility period approaches, the body should start to decay – which is known as senescence, or aging.

For humans this is only partly true. According to the Nature study, mortality of modern Japanese women rises constantly after childhood. But contradictorily, humans still live for a long time after fertility has ceased. Today, many people stay healthy until they are grandparents and their probability of dying is correspondingly small. Only at advanced ages is mortality growing rapidly. For example, in Japanese women 100 years old, mortality reaches more than 20 times their lifetime average.

This makes humans a real oddity. No other species in the researcher’s catalog has a mortality curve which rises that sharply. Even among other mammals, death rates reach no more than five times the lifetime average. Why evolution developed such big differences is a mystery to Biologists.
For many species aging is turned upside down

Current theories are especially at odds with two groups of species for which the concept of aging appears to be turned upside down. On the one hand there are creatures whose mortality stays constant throughout their whole life, like hydra or the hermit crab. Their bodies do not seem to degenerate during their lifetime which can be understood as the absence of aging. And there are even species whose probability of dying decreases as they grow older, like the red gorgonian (a coral), the netleaf oak and the desert tortoise. Their risk of dying obviously never becomes zero, but when they are old they are more likely to survive until their next birthday than when they were in their youth.

There is another belief that the new data catalogue disproves: the idea that species with a short life span die so soon because they age so quickly. This would mean that their mortality rises strongly throughout life. However, sometimes the contrary is the case, such as in the tundra vole. Its mortality increases only moderately until it reaches two times its lifetime average at old age. Nevertheless, this vole rarely survives beyond one year. Humans, however, are living for an entire century more and more often, despite the fact that their risk of dying skyrockets at old age (up to more than 20 times the lifetime average).

Data will pave the way for a unified theory of aging

“Surprisingly, one can hardly imagine a type of life course that is not found in nature,” says MaxO researcher Owen Jones. This applies not only for mortality but also for fertility. While women become infertile after a limited childbearing period in the first half of their lives, fertility rises until almost the end of the lifespan for the alpine swift. And the yellow baboon has offspring throughout its life without any influence of age. “One reason why we still lack a unified theory of aging is that our view on aging was always biased because we had data only for a very restricted selection of species,” says biodemographer Alexander Scheuerlein from MPIDR. There have long been high quality demographic records for hundreds of mammals and birds but very few for other vertebrates or invertebrates. Extremely little is known about algae, fungi or bacteria. In order to understand why evolution created aging, much more comprehensive data on all species have to be collected, says Alexander Scheuerlein.