True Story: Not Everyone Lies Frequently

Many liars prove honest in their dishonesty

Does everybody lie? We are taught that this is common sense and that most people tell little white lies. But perhaps this isn't true. A recent paper published in Human Communication Research found that many people are honest most of the time, that many are honest about their lying, and that some lie a lot.

Rony Halevy, Bruno Verschuere (University of Amsterdam), and Shaul Shalvi (Ben-Gurion University), surveyed 527 people to find out how often they had lied over the past 24 hours. 41% of the respondents indicated that they had not lied at all, whereas just 5% turned out to be accountable for 40% of all of the lies told. 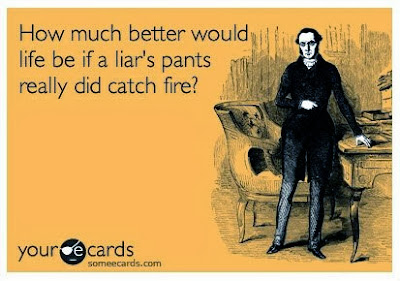 To find out whether the respondents were honest about the frequency of their lying, they were invited to take part in an additional lab test. They were asked to roll dice and received a sum of money depending on the number they reported having rolled. Because the researchers were unable to see the actual numbers rolled, participants were free to cheat and report higher numbers. Participants who had already admitted to lying more frequently also had higher winnings in this dice test, indicating that participants, who said they lie often, did indeed lie often. Statistically, their scores were so implausible that they are likely to have lied about the numbers they rolled, rather enjoying a series of lucky rolls.

Previous studies found that, on average, survey participants admitted to lying twice a day. According to the study, this does not permit the conclusion that everyone lies. Because this is an average, it gives a distorted picture of individual differences in lying behavior.

"The fact that participants who indicated lying often actually did lie more often in the dice test demonstrates that they were honest about their dishonesty," said Verschuere. It may be that frequent liars show more psychopathic traits and therefore have no trouble admitting to lying frequently."