Spiders Partial To A Side Order Of Pollen With Their Flies

Spiders may not be the pure predators we generally believe, after a study found that some make up a quarter of their diet by eating pollen.

Dr Dirk Sanders of the University of Exeter demonstrated that orb web spiders – like the common garden variety – choose to eat pollen even when insects are available.

Orb weaver spiders -- like the common garden variety -- choose to eat pollen even when insects are available. 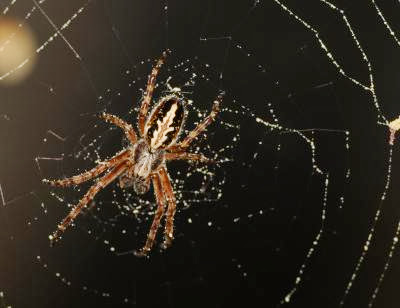 Dr Sanders, alongside Mr Benjamin Eggs from the University of Bern, conducted feeding experiments and a stable isotope analysis on juvenile spiders to see whether they incorporate plant resources into their diet.

They discovered that 25 per cent of the spiders' food intake was made up of pollen, with the remaining 75 per cent consisting of flying insects.

The spiders that ate both pollen and flies gained optimal nourishment, with all essential nutrients delivered by the combination.

Dr Sanders, of the Centre for Ecology and Conservation at the University of Exeter's Penryn Campus, said: "Most people and researchers think of spiders as pure carnivores, but in this family of orb web spiders that is not the case. We have demonstrated that the spiders feed on pollen caught in their webs, even if they have additional food, and that it forms an important part of their nourishment.

"The proportion of pollen in the spiders' diet in the wild was high, so we need to classify them as omnivores rather than carnivores."

Orb web spiders regularly take down and eat their webs to recycle the silk proteins, and it had been suggested they may 'accidentally' consume the pollen during this process.

But the study found this to be impossible due to the size of the grains ingested, indicating that they were actively consumed by the spider coating them in a digestive enzyme before sucking up the nutrients.

The research paper, Herbivory in Spiders: The Importance of Pollen for Orb-Weavers, is published in the journal PLOS One.


Contacts and sources:
Eleanor Gaskarth
University of Exeter
on December 18, 2013