Technology potentially could create a clean, renewable source of energy

Researchers from the University of Houston have found a catalyst that can quickly generate hydrogen from water using sunlight, potentially creating a clean and renewable source of energy.

Their research, published online Sunday in Nature Nanotechnology, involved the use of cobalt oxide nanoparticles to split water into hydrogen and oxygen.

Jiming Bao, lead author of the paper and an assistant professor in the Department of Electrical and Computer Engineering at UH, said the research discovered a new photocatalyst and demonstrated the potential of nanotechnology in engineering a material's property, although more work remains to be done. 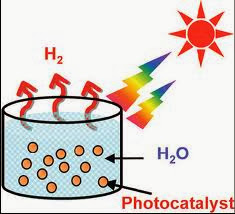 Bao said photocatalytic water-splitting experiments have been tried since the 1970s, but this was the first to use cobalt oxide and the first to use neutral water under visible light at a high energy conversion efficiency without co-catalysts or sacrificial chemicals. The project involved researchers from UH, along with those from Sam Houston State University, the Chinese Academy of Sciences, Texas State University, Carl Zeiss Microscopy LLC, and Sichuan University.

Different sources of light were used, ranging from a laser to white light simulating the solar spectrum. He said he would expect the reaction to work equally well using natural sunlight.

Once the nanoparticles are added and light applied, the water separates into hydrogen and oxygen almost immediately, producing twice as much hydrogen as oxygen, as expected from the 2:1 hydrogen to oxygen ratio in H2O water molecules, Bao said.

The experiment has potential as a source of renewable fuel, but at a solar-to-hydrogen efficiency rate of around 5 percent, the conversion rate is still too low to be commercially viable. Bao suggested a more feasible efficiency rate would be about 10 percent, meaning that 10 percent of the incident solar energy will be converted to hydrogen chemical energy by the process.

Other issues remain to be resolved, as well, including reducing costs and extending the lifespan of cobalt oxide nanoparticles, which the researchers found became deactivated after about an hour of reaction.

"It degrades too quickly," said Bao, who also has appointments in materials engineering and the Department of Chemistry.

The work, supported by the Welch Foundation, will lead to future research, he said, including the question of why cobalt oxide nanoparticles have such a short lifespan, and questions involving chemical and electronic properties of the material.


Contacts and sources:
Jeannie Kever
University of Houston
on December 15, 2013