New research using data from NASA's Van Allen Probes mission helps resolve decades of scientific uncertainty over the origin of ultra-relativistic electrons in Earth's near space environment, and is likely to influence our understanding of planetary magnetospheres throughout the universe. 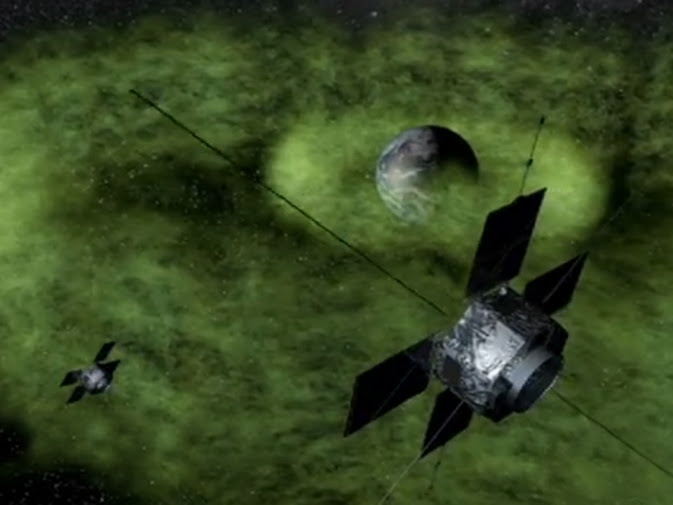 Understanding the processes that control the formation and ultimate loss of such relativistic electrons is a primary science objective of the Van Allen Probes and has important practical applications, because of the enormous amounts of radiation trapped within the two Van Allen radiation belts. The belts, consisting of high-energy electrons and protons discovered above Earth's upper atmosphere in 1958 by James Van Allen, can pose a significant hazard to satellites and spacecraft, as well to astronauts performing activities outside a spacecraft.

Such electrons in the Earth's outer radiation belt can exhibit pronounced increases in intensity, in response to activity on the sun, and changes in the solar wind — but the dominant physical mechanisms responsible for such radiation belt electron acceleration has remained unresolved for decades.

Two primary candidates for electron acceleration exist, one external and one internal. From outside the belts, a theoretical process known as inward radial diffusive transport has been developed. From within the belts, scientists hypothesize that the electrons are undergoing strong local acceleration from very low frequency plasma waves. Controversies also exist as to the very nature of the wave acceleration: Is it stochastic – that is, a linear and diffusive process – or is it non-linear and coherent?

In research published Dec. 19, 2013, in Nature, lead author Richard Thorne and colleagues report on high-resolution measurements, made by the Van Allen Probes, which suggest that local acceleration is at work. The team observed high-energy electrons during a geomagnetic storm of Oct. 9, 2012, which they analyzed together with a data-driven global wave model. Their analysis reveals that linear, stochastic scattering by intense, natural very low-frequency radio waves -- known as chorus waves -- in Earth's upper atmosphere can account for the observed relativistic electron build-up.

"The successful point-by-point comparison of radiation belt features observed by the Van Allen Probes with the predictions of the state of the art model developed by Richard Thorne and his group dramatically demonstrates the significance of in situ particle acceleration within Earth's radiation belts," said David Sibeck, mission scientist for the Van Allen Probes at NASA's Goddard Space Flight Center in Greenbelt, Md.

The detailed modeling reported in Nature, together with previous observations reported earlier this year in the journal Science [link to article ] of peaks in electron phase space density by Geoff Reeves at Los Alamos National Laboratory in New Mexico and colleagues, demonstrates the remarkable efficiency of natural wave acceleration in Earth's near space environment. Their research shows that radial diffusion was not responsible for the observed acceleration during this storm, said Thorne, a scientist at the University of California at Los Angeles.

The local wave acceleration process is a universal physical process and should also be effective in the magnetospheres of Jupiter, Saturn and other magnetized plasma environments in the cosmos, Thorne said. He thinks the new results from the detailed analysis at Earth will influence future modeling of other planetary magnetospheres.

"This new finding is of paramount importance to unlocking the multitude of processes behind particle behavior in the belts," says Barry Mauk, project scientist for the Van Allen Probes at the Johns Hopkins Applied Physics Laboratory in Laurel, Md. "To have one of the primary science objectives of the mission met within just over a year of launch is a testament to the quality and quantity of the data the instruments on the probes are gathering, and to the teams analyzing them."

The research was funded by NASA, which launched the twin Van Allen Probes in the summer of 2012. The Johns Hopkins Applied Physics Laboratory built and operates the probes for NASA's Science Mission Directorate. The Van Allen Probes are the second mission in NASA's Living With a Star program, managed by NASA Goddard. The program explores aspects of the connected sun-Earth system that directly affect life and society.

For more on the Van Allen Probes: www.nasa.gov/vanallenprobes