Oil From Algae In Minutes, It Takes Nature Millions Of Years

Engineers have created a continuous chemical process that produces useful crude oil minutes after they pour in harvested algae — a verdant green paste with the consistency of pea soup. 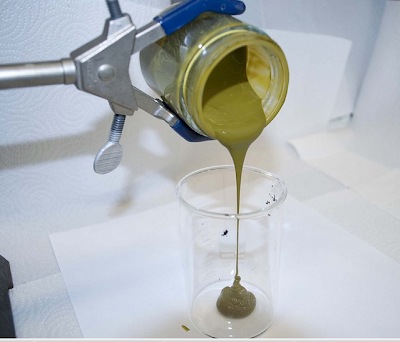 The research by engineers at the Department of Energy's Pacific Northwest National Laboratory was reported recently in the journal Algal Research. A biofuels company, Utah-based Genifuel Corp., has licensed the technology and is working with an industrial partner to build a pilot plant using the technology. 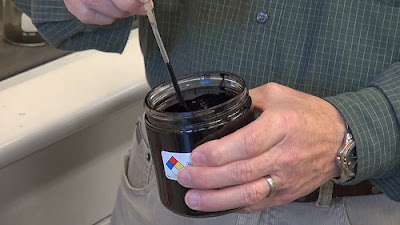 In the PNNL process, a slurry of wet algae is pumped into the front end of a chemical reactor. Once the system is up and running, out comes crude oil in less than an hour, along with water and a byproduct stream of material containing phosphorus that can be recycled to grow more algae. 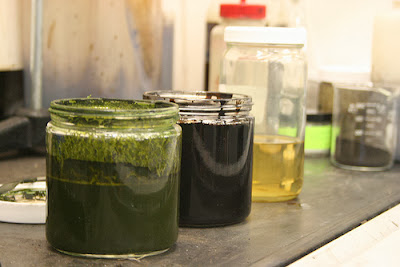 With additional conventional refining, the crude algae oil is converted into aviation fuel, gasoline or diesel fuel. And the waste water is processed further, yielding burnable gas and substances like potassium and nitrogen, which, along with the cleansed water, can also be recycled to grow more algae.

While algae has long been considered a potential source of biofuel, and several companies have produced algae-based fuels on a research scale, the fuel is projected to be expensive. The PNNL technology harnesses algae's energy potential efficiently and incorporates a number of methods to reduce the cost of producing algae fuel.

"Cost is the big roadblock for algae-based fuel," said Douglas Elliott, the laboratory fellow who led the PNNL team's research. "We believe that the process we've created will help make algae biofuels much more economical."

PNNL scientists and engineers simplified the production of crude oil from algae by combining several chemical steps into one continuous process. The most important cost-saving step is that the process works with wet algae. Most current processes require the algae to be dried — a process that takes a lot of energy and is expensive. The new process works with an algae slurry that contains as much as 80 to 90 percent water.

"Not having to dry the algae is a big win in this process; that cuts the cost a great deal," said Elliott. "Then there are bonuses, like being able to extract usable gas from the water and then recycle the remaining water and nutrients to help grow more algae, which further reduces costs."

While a few other groups have tested similar processes to create biofuel from wet algae, most of that work is done one batch at a time. The PNNL system runs continuously, processing about 1.5 liters of algae slurry in the research reactor per hour. While that doesn't seem like much, it's much closer to the type of continuous system required for large-scale commercial production.

The PNNL system also eliminates another step required in today's most common algae-processing method: the need for complex processing with solvents like hexane to extract the energy-rich oils from the rest of the algae. Instead, the PNNL team works with the whole algae, subjecting it to very hot water under high pressure to tear apart the substance, converting most of the biomass into liquid and gas fuels.

The system runs at around 350 degrees Celsius (662 degrees Fahrenheit) at a pressure of around 3,000 PSI, combining processes known as hydrothermal liquefaction and catalytic hydrothermal gasification. Elliott says such a high-pressure system is not easy or cheap to build, which is one drawback to the technology, though the cost savings on the back end more than makes up for the investment.

"It's a bit like using a pressure cooker, only the pressures and temperatures we use are much higher," said Elliott. "In a sense, we are duplicating the process in the Earth that converted algae into oil over the course of millions of years. We're just doing it much, much faster."

The products of the process are:
Crude oil, which can be converted to aviation fuel, gasoline or diesel fuel. In the team's experiments, generally more than 50 percent of the algae's carbon is converted to energy in crude oil — sometimes as much as 70 percent.
Clean water, which can be re-used to grow more algae.
Fuel gas, which can be burned to make electricity or cleaned to make natural gas for vehicle fuel in the form of compressed natural gas.
Nutrients such as nitrogen, phosphorus, and potassium — the key nutrients for growing algae.

Elliott has worked on hydrothermal technology for nearly 40 years, applying it to a variety of substances, including wood chips and other substances. Because of the mix of earthy materials in his laboratory, and the constant chemical processing, he jokes that his laboratory sometimes smells "like a mix of dirty socks, rotten eggs and wood smoke" — an accurate assessment.

Genifuel Corp. has worked closely with Elliott's team since 2008, licensing the technology and working initially with PNNL through DOE's Technology Assistance Program to assess the technology.

"This has really been a fruitful collaboration for both Genifuel and PNNL," said James Oyler, president of Genifuel. "The hydrothermal liquefaction process that PNNL developed for biomass makes the conversion of algae to biofuel much more economical. Genifuel has been a partner to improve the technology and make it feasible for use in a commercial system.

"It's a formidable challenge, to make a biofuel that is cost-competitive with established petroleum-based fuels," Oyler added. "This is a huge step in the right direction."

The recent work is part of DOE's National Alliance for Advanced Biofuels & Bioproducts, or NAABB. This project was funded with American Recovery and Reinvestment Act funds by DOE's Office of Energy Efficiency and Renewable Energy. Both PNNL and Genifuel have been partners in the NAABB program.