Nutrients In Food Vital To Location Of Early Human Settlements: The Original 'Palaeo-Diet'

Research led by the University of Southampton has found that early humans were driven by a need for nutrient-rich food to select 'special places' in northern Europe as their main habitat. Evidence of their activity at these sites comes in the form of hundreds of , including handaxes.

A study led by physical geographer at Southampton Professor Tony Brown, in collaboration with archaeologist Dr Laura Basell at Queen's University Belfast, has found that sites popular with our early human ancestors, were abundant in foods containing nutrients vital for a balanced diet. The most important sites, dating between 500,000 to 100,000 years ago were based at the lower end of river valleys, providing ideal bases for early hominins – early humans who lived before Homo sapiens (us). 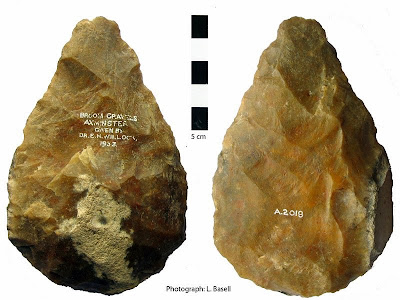 Professor Brown says: "Our research suggests that floodplain zones closer to the mouth of a river provided the ideal place for hominin activity, rather than forested slopes, plateaus or estuaries. The landscape in these locations tended to be richer in the nutrients critical for maintaining population health and maximising reproductive success."

The project was funded by English Heritage and the University of Southampton's Faculty of Social and Human Sciences. It involved academics from Geography and Environment and Medicine at Southampton, together with Archaeology at Queen's.

The researchers began by identifying Palaeolithic sites in southern England and northern France where high concentrations of handaxes had been excavated –for example at Dunbridge in Hampshire, Swanscombe near Dartford and the Somme Valley in France. They found there were fewer than 25 sites where 500 handaxes or more were discovered. The high concentration of these artefacts suggests significant activity at the sites and that they were regularly used by early hominins.

Professor Brown and his colleagues then compiled a database of plants and animals known to exist in the Pleistocene epoch (a period between 2.6 million to 11,700 years ago) to establish a potential list of nutrient resources in the landscape and an estimation of the possible diet. This showed that an abundance of nutritious foods were available and suggests this was likely to have been the dominant factor driving early humans to focus on these sites in the lower reaches of river valleys, close to the upper tidal limit of rivers.

Over 50 nutrients are needed to sustain human life. In particular, it would have been essential for early humans to find sources of protein, fats, carbohydrates, folic acid and vitamin C. The researchers suggest vitamins and protein may have come from sources such as raw liver, eggs, fish and plants, including watercress (which grows year round). Fats in particular, may have come from bone marrow, beaver tails and highly nutritious eels.

The nutritional diversity of these sites allowed hominins to colonise the Atlantic fringe of north west Europe during warm periods of the Pleistocene. These sites permitted the repeated occupation of this marginal area from warmer climate zones further south

Professor Brown comments: "We can speculate that these types of locations were seen as 'healthy' or 'good' places to live which hominins revisited on a regular basis. If this is the case, the sites may have provided 'nodal points' or base camps along nutrient-rich route-ways through the Palaeolithic landscape, allowing early humans to explore northwards to more challenging environments."

The paper 'Site Distribution at the Edge of the Palaeolithic World: A Nutritional Niche Approach' will be published online by the journal PLOS ONE :http://dx.plos.org/10.1371/journal.pone.0081476

Contacts and sources:
Peter Franklin
University of Southampton
on December 13, 2013