Two teams of researchers, including a scientist from Case Western Reserve University, have announced the discovery of a new species of fossil horse from 4.4 million-year-old fossil-rich deposits in Ethiopia.

About the size of a small zebra, Eurygnathohippus woldegabrieli—named for geologist Giday WoldeGabriel, who earned his PhD at Case Western Reserve in 1987—had three-toed hooves and grazed the grasslands and shrubby woods in the Afar Region, the scientists say.

They report their findings in the November issue of Journal of Vertebrate Paleontology.

The horse fills a gap in the evolutionary history of horses but is also important for documenting how old a fossil locality is and in reconstructing habitats of human forebears of the time, said Scott Simpson, professor of anatomy at Case Western Reserve's School of Medicine, and coauthor of the research. "This horse is one piece of a very complex puzzle that has many, many pieces." 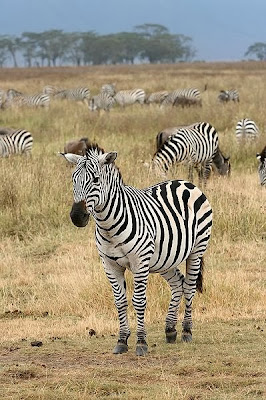 The researchers found the first E. woldegabrieli teeth and bones in 2001, in the Gona area of the Afar Region. This fossil horse was among the diverse array of animals that lived in the same areas as the ancient human ancestor Ardipithecus ramidus, commonly called Ardi. 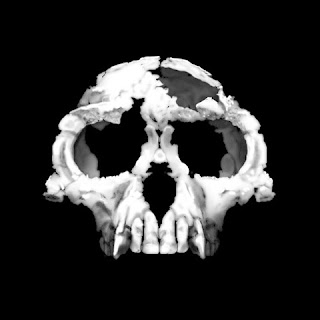 "The fossil search team spreads out to survey for fossils in the now arid badlands of the Ethiopian desert.," Simpson said. "Among the many fossils we found are the two ends of the foreleg bone—the canon—brilliant white and well preserved in the red-tinted earth."

A year later, they returned and found part of the connecting shaft, which was split lengthwise but provided the crucial full length of the bone. The long slender bone indicates this ancient species was an adept runner, similar to modern zebras, and analyses of their teeth indicated they relied heavily on eating grasses in the grassy woodland environment.

The horse had longer legs than ancestral horses that lived and fed in forests about 6 million to 10 million years ago, Simpson said. The change helped the more recent horses cover long distances as they grazed and flee lions, sabre-tooth cats and hunting hyenas that would run down their prey.

The other fossils they found included teeth, which are taller than their ancestors' and with crowns worn flatter—more signs the horses had adapted to a grazing life. Analyses of the isotopic composition of the enamel confirmed that E. woldegabrieli subsisted on grass.

"Grasses are like sandpaper," Simpson said. "They wear the teeth down and leave a characteristic signature of pits and scratches on the teeth so we can reliably reconstruct their ancient diets."

Horse expert Raymond L. Bernor, from the Laboratory of Evolutionary Biology at the Howard University College of Medicine in Washington D.C., led the fossil analysis. The bones, which remain at the National Museum of Ethiopia in Addis Ababa, Ethiopia, showed this was a significantly different animal than the horses more than 5 million years old, and those 3.5 million years old and younger. Members of the youngest group are taller and have longer noses, further adaptations to the open grasslands, the researchers say.

Members of the two paleontological projects decided to name the species in honor of WoldeGabriel, a geologist at Los Alamos National Laboratory. They want to recognize the high professional regard he's earned from peers and his many contributions in unraveling the geological complexities of the deposits in the Ethiopian Rift system where fossils of some of our oldest human ancestors have been found

WoldeGabriel, who was not involved in the analysis of the fossil horse, is the project geologist for the Middle Awash project in Ethiopia.

"Giday oversees the sedimentology, geochronology and volcanology and how the Middle Awash Valley in the Afar rift is changing shape," Simpson said. He praised WoldeGabriel as a top scientist who helps fellow researchers navigate the rugged region and government offices.

"And he leads by example, in terms of working hard," Simpson continued. "He's not afraid of a very long walk in the heat, carrying a 5-pound hammer to collect samples."

The team continues to analyze fossil remains they collected at this and nearby sites.