New Results From Inside the Ozone Hole Revealed By NASA

NASA scientists have revealed the inner workings of the ozone hole that forms annually over Antarctica and found that declining chlorine in the stratosphere has not yet caused a recovery of the ozone hole.

More than 20 years after the Montreal Protocol agreement limited human emissions of ozone-depleting substances, satellites have monitored the area of the annual ozone hole and watched it essentially stabilize, ceasing to grow substantially larger. However, two new studies show that signs of recovery are not yet present, and that temperature and winds are still driving any annual changes in ozone hole size.

The area of the ozone hole, such as in October 2013,  is one way to view the ozone hole from year to year. However, the classic metrics have limitations. 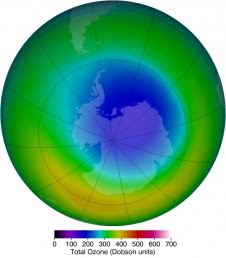 "Ozone holes with smaller areas and a larger total amount of ozone are not necessarily evidence of recovery attributable to the expected chlorine decline," said Susan Strahan of NASA's Goddard Space Flight Center in Greenbelt, Md. "That assumption is like trying to understand what's wrong with your car's engine without lifting the hood."

To find out what's been happening under the ozone hole's hood, Strahan and Natalya Kramarova, also of NASA Goddard, used satellite data to peer inside the hole. The research was presented Wednesday at the annual meeting of the American Geophysical Union in San Francisco.

Kramarova tackled the 2012 ozone hole, the second-smallest hole since the mid 1980s. To find out what caused the hole's diminutive area, she turned to data from the NASA-NOAA Suomi National Polar-orbiting Partnership satellite, and gained the first look inside the hole with the satellite's Ozone Mapper and Profiler Suite's Limb Profiler. Next, data were converted into a map that shows how the amount of ozone differed with altitude throughout the stratosphere in the center of the hole during the 2012 season, from September through November.

The map revealed that the 2012 ozone hole was more complex than previously thought. Increases of ozone at upper altitudes in early October, carried there by winds, occurred above the ozone destruction in the lower stratosphere.

"Our work shows that the classic metrics based on the total ozone values have limitations – they don't tell us the whole story," Kramarova said.

A look inside the 2012 ozone hole with the Ozone Mapper and Profiler Suite shows how the build-up of ozone (parts per million by volume) in the middle stratosphere masks the ozone loss in the lower stratosphere.

The classic metrics create the impression that the ozone hole has improved as a result of the Montreal protocol. In reality, meteorology was responsible for the increased ozone and resulting smaller hole, as ozone-depleting substances that year were still elevated. The study has been submitted to the journal of Atmospheric Chemistry and Physics.

Separate research led by Strahan tackled the holes of 2006 and 2011 – two of the largest and deepest holes in the past decade. Despite their similar area, however, Strahan shows that they became that way for very different reasons.

Strahan used data from the NASA Aura satellite's Microwave Limb Sounder to track the amount of nitrous oxide, a tracer gas inversely related to the amount of ozone depleting chlorine. The researchers were surprised to find that the holes of 2006 and 2011 contained different amounts of ozone-depleting chlorine. Given that fact, how could the two holes be equally severe?

A cross-section of Earth's ozone layer as measured by the limb profiler, part of the Ozone Mapper Profiler Suite that's aboard the Suomi NPP satellite. 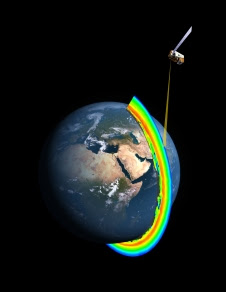 This work shows that the severity of the ozone hole as measured by the classic total column measurements does not reveal the significant year-to-year variations in the two factors that control ozone: the winds that bring ozone to the Antarctic and the chemical loss due to chlorine.

Until chlorine levels in the lower stratosphere decline below the early 1990s level – expected sometime after 2015 but likely by 2030 – temperature and winds will continue to dictate the variable area of the hole in any given year. Not until after the mid 2030s will the decline stratospheric chlorine be the primary factor in the decline of ozone hole area.

"We are still in the period where small changes in chlorine do not affect the area of the ozone hole, which is why it's too soon to say the ozone hole is recovering," Strahan said. "We're going into a period of large variability and there will be bumps in the road before we can identify a clear recovery."