New Findings Could Enhance Stabilizing Or Destabilizing Nanoparticles, Depending On Their Uses

University of Oregon chemists studying the structure of ligand-stabilized gold nanoparticles have captured fundamental new insights about their stability. The information, they say, could help to maintain a desired, integral property in nanoparticles used in electronic devices, where stability is important, or to design them so they readily condense into thin films for such things as inks or catalysts in electronic or solar devices.

University of Oregon chemistry professor James Hutchison has uncovered important information about the stability of nanoparticles that could help drive more precise preparation of particles or precursors for thin films. 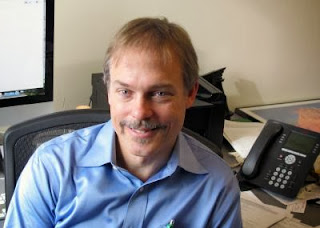 In a project — detailed in the Nov. 27 issue of the Journal of Physical Chemistry C — doctoral student Beverly L. Smith and James E. Hutchison, who holds the Lokey-Harrington Chair in Chemistry at the UO, analyzed how nanoparticle size and molecules on their surfaces, called ligands, influence structural integrity under rising temperatures.

They focused on nanoparticles less than two nanometers in diameter — the smallest studied to date — to better understand structural stability of these tiny particles being engineered for use in electronics, medicine and other materials. Whether a nanoparticle needs to remain stable or condense depends on how they are being used. Those used as catalysts in industrial chemical processing or quantum dots for lighting need to remain intact; if they are precursors for coatings in solar devices or for printing ink, nanoparticles need to be unstable so they sinter and condense into a thin mass.

The researchers found that smaller nanoparticles have better structural integrity than larger-sized particles that have been tested. In other words, Hutchison said, they are less likely to lose their ligands and bind together. "If you have unstable particles, then the property you want is fleeting," he said. "Either the light emission degrades over time and you're done, or the metal becomes inactive and you're done. In that case, you want to preserve the function and keep the particles from aggregating."The opposite is desired for Hutchison and others working in the National Science Foundation-funded Center for Sustainable Materials Chemistry, a multi-universities collaboration led by the UO and Oregon State University. Researchers there are synthesizing nanoparticles as precursors for thin films.

"We want solution precursors that can lead to inorganic thin films for use in electronics and solar industries," said Hutchison, who also is a member of the UO Materials Science Institute.

"In this case, we want to know how to keep our nanoparticles or other precursors stable enough in solution so that we can work with them, using just a tiny amount of additional energy to make them unstable so that they condense into a film -- where the property that you want comes from the extended solid that is generated, not from the nanoparticles themselves."

The research, Hutchison said, identified weak sites on nanoparticles where ligands might pop off. If only a small amount do so, he said, separate nanoparticles are more likely to come together and begin the sintering process to create thin films.

"That's a really stabilizing effect that, in turn, kicks out all these ligands on the outside," he said. "The surface area decreases quickly and the particles get bigger, but now all the extra ligands gets excluded into the film and then, over time, the ligands vaporize and go away."

The coming apart, however, is a "catastrophic failure" if protecting against sintering is the goal. It may be possible to use the findings, he said, to explore ways to strengthen nanoparticles, such as developing ligands that bind in at least two sites or avoiding volatile ligands.

The process, as studied, produced porous gold films. "A next step might be to study how to manipulate the process to get a more dense film if that is desired," Hutchison said. Understanding how nanoparticles respond to certain conditions, such as changing temperatures, he added, may help researchers reduce waste in the manufacturing process.

"Researchers at the University of Oregon are re-engineering the science, manufacturing and business processes behind critical products," said Kimberly Andrews Espy, vice president for research and innovation and dean of the UO Graduate School. "This research analyzing the structural stability of nanoparticles by Dr. Hutchison and his team has the potential to improve the engineering of electronics, medicine and other materials, helping to foster a sustainable future for our planet and its people."

Smith, the paper's lead author, received a master's degree in chemistry in 2009 from the UO. She now is a doctoral student in Hutchison's lab. During the initial stages of the research, she was supported by the NSF's Integrative Graduate Education and Research Traineeship (IGERT) program. Funding from the Air Force Research Laboratory (grant No. FA8650-05-1-5041) to Hutchison also supported the research.

Hutchison also is a member of both the Oregon Nanoscience and Microtechnologies Institute (ONAMI) and Oregon BEST (Oregon Built Environment & Sustainable Technologies Center), which are state signature research initiatives.

Contacts and sources:
Jim Barlow
University of Oregon
on December 10, 2013