Scientists have determined the magnitude of the Mount Gambier volcano eruption 5,000 years ago, and say if a similar eruption occurred again, it could cause widespread damage.

Detailed in the Bulletin of Volcanology, researchers from Monash University’s Volcanology Research Group (MONVOLC) used 3D geometrical computer modelling and thermodynamics – the study of the relationship between different forms of energy – to determine the size and magnitude of the Mount Gambier eruption.

The image shows the Mt Schank crater in Mt Gambier 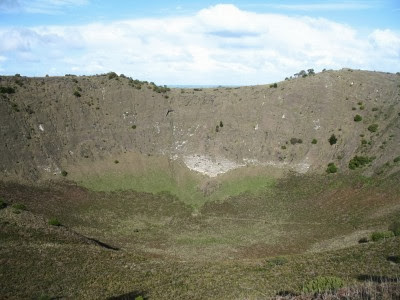 It is believed to be the first time the magnitude and size of a volcano on Australian mainland has been calculated, based on volume estimates of the volcanic deposits, and modelling of the volcanic plume, ash-dispersal and thermodynamics.

Dr Jozua van Otterloo and Professor Ray Cas, of the School of Geosciences, estimated the nation's most recently active volcano registered as a size four eruption on the Volcanic Explosivity Index (VEI) – a similar size to the Eyjafjallajökull, Iceland eruption in 2010, which caused global chaos.

Dr van Otterloo said in contrast, Australia could face the same scale of tragedy if a volcano west of Melbourne was to erupt.

“Little is known about the magnitude of eruptions from this volcanic province (the Newer Volcanics) that stretches around 400 kilometres between Melbourne and Mount Gambier. It has over 400 eruption centres and has been active for at least 4 to 5 million years,” Dr van Otterloo said.

“Normally the size and magnitude of eruptions of active volcanoes are determined based on observations during these eruptions. Using 3D geometrical modelling, we’ve shown it is also possible to obtain volume estimates for different deposits of a prehistoric, monogenetic volcanic centre.”

The team produced a diagram showing the impact of ash plume as it dispersed from the 2010 Iceland eruption over Europe, but juxtaposed over Australia with the eruption in Mount Gambier.

It was shown that the amount of material dispersed during the Mount Gambier eruption was equivalent to the volume of 130,000 Olympic pools.

“Magma rose to the surface from a depth of 80 kilometres and a large part of that magma interacted with the shallow groundwater which made the eruption so violent. With an ash plume of at least 5-10 km high, the eruption can be classified as a size four eruption on the Volcanic Explosivity Index (VEI),” Dr van Otterloo said.

“When and where the next eruption will occur is unknown. That is why our team continues undertaking extensive research in the area. Although statistics tell us it could be a long time before the next eruption, the main hazard is that when it does, we will only have a few days warning.”

Dr van Otterloo said a similar eruption in the region would cause closure of the major airspace of eastern Australia, health risks from fine ash composed of glass fragments destruction of crops and impacts on livestock up to 100 kilometres from the erupting site and disruption to local infrastructure.

“Understanding explosive volcanism aids the community to manage risk and provides insight into potential regional or global disruptions including to infrastructure, and impact on climate,” Dr van Otterloo said.