In collaboration with the University of Basel, an international team of researchers has observed a strong energy loss caused by frictional effects in the vicinity of charge density waves. This may have practical significance in the control of nanoscale friction. The results have been published in the scientific journal Nature Materials.

Friction is often seen as an adverse phenomenon that leads to wear and causes energy loss.

Conversely, however, too little friction can be a disadvantage as well – for example, running on an icy surface or driving on a wet road.

An oscillating Atomic Force Microscope tip is shown in proximity to the Charge Density Wave (CDW) on NbSe2 surface. The yellow and blue spheres are the Selenium and Niobium atoms forming the lattice. A single CDW phase slip process is visible onto NbSe2 surface in the vicinity of the tip. 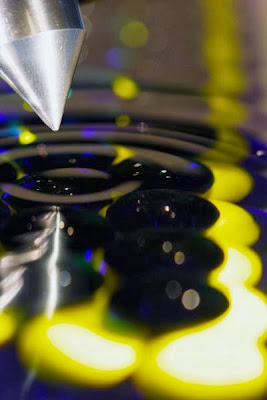 An understanding of frictional effects is therefore of great importance – particularly in the field of nanotechnology, where friction has to be controlled at a nanoscale. A recent study conducted by researchers from the University of Basel, the University of Warwick, the CNR Institute SPIN in Genoa and the International Centre for Theoretical Physics (ICTP) in Trieste has helped to give a better understanding of how friction works in microscopic dimensions.

In the experiment led by Prof. Dr. Ernst Meyer, Professor of Experimental Physics at the University of Basel, the team vibrated the nanometer-sized tip of an atomic force microscope above the surface of a layered structure of niobium and selenium atoms. They selected this combination due to its unique electronic properties, and in particular the charge-density waves formed at extremely low temperatures. The electrons are no longer evenly distributed as in a metal, but instead form areas where the electron density fluctuates between a high and low range.

Energy losses in the vicinity of charge density waves

The researchers registered very high energy losses in the vicinity of these charge density waves between the surface and the tip of the atomic force microscope, even at relatively large distances of several atomic diameters. "The energy drop was so great, it was as if the tip had suddenly been caught in a viscous fluid," says Meyer.

The theoretical model shows that the high energy loss results from a series of local phase shifts in the charge density waves. This newly discovered phenomenon may be of practical significance in the field of nanotechnology, particularly as the frictional effect can be modulated as a function of distance and voltage.