The innermost moon of Mars, Phobos, is seen here in full 360 degree glory. The images were taken by the High Resolution Stereo Camera (HRSC) on ESA's Mars Express at various times throughout the mission's 10 years.

The moon's parallel sets of grooves are perhaps the most striking feature, along with the giant 9 km-wide Stickney impact crater that dominates one face of the 27 x 22 x 18 km moon. 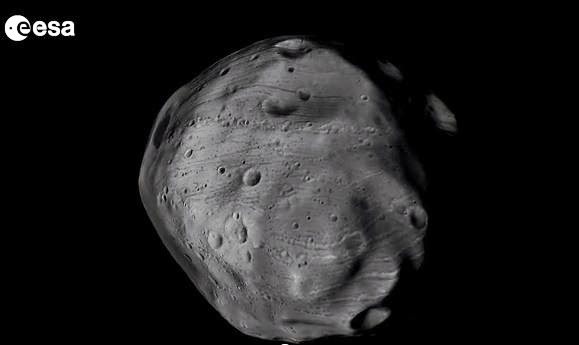 The origin of the moon's grooves is a subject of much debate. One idea assumes that the crater chains are associated with impact events on the moon itself.

Another idea suggests they result from Phobos moving through streams of debris thrown up from impacts 6000 km away on the surface of Mars, with each 'family' of grooves corresponding to a different impact event.

Mars Express has imaged Phobos from a wide range of distances, but will make its closest flyby yet on 29 December 2013, at just 45 km above the moon.

Although this is too close to take images, gravity experiments will give insight into the interior structure of Phobos.