Easily manufactured, low-cost artificial cells manufactured using microprinting may one day serve as drug and gene delivery devices and in biomaterials, biotechnology and biosensing applications, according to a team of Penn State biomedical engineers. These artificial cells will also allow researchers to explore actions that take place at the cell membrane. 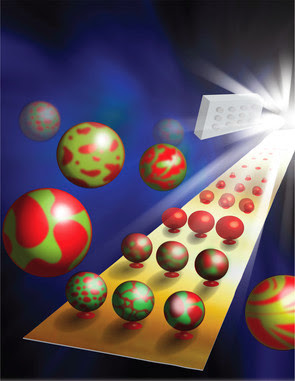 "In a natural cell, so much is going on inside that it is extremely complex," said Sheereen Majd, assistant professor of biomedical engineering. "With these artificial cells -- liposomes -- we have just the shell, which gives us the ability to dissect the events that happen at the membrane."

Understanding how drugs and pathogens cross the cell membrane barrier is essential in preventing disease and delivering drugs, and researchers have created artificial cells for quite some time. However, Majd's team is creating large arrays of artificial cells, made of lipids and proteins, of uniform size that can either remain attached to the substrate on which they grow, or become separated and used as freely moving vessels. The researchers report the results of their work today (Dec. 15) in Advanced Materials.

"The trend in the pharmaceutical industry today is that they like to do high throughput screenings," said Majd. "They could use a large number of these artificial cells all of the same size with the same conditions in an array and monitor many cells at once." The researchers' cells are also different because they contain lipids with protein components the way cell membranes exist in nature. The various proteins serve to allow certain materials to enter and leave the cell, acting as regulators.

"These giant proteoliposomes closely mimic cellular membranes," said Majd. "So they are excellent model systems for studying processes that happen at the surface of cells such as the molecular events that occur when pathogens and drugs enter cells." Older methods of artificial cell creation used dried lipids, but in order to create cells with proteins, the system must remain moist because when proteins dry out, they become useless.

"The physical phenomenon on exactly how the AC field creates the bubbles is not yet understood," said Majd. "But the bottom line is that the AC electric field produces agitation that creates the tiny bubbles that merge to form the cells. This process is called electroformation." The variety of lipids and proteins used can vary depending on the ultimate purpose of the artificial cells. The cells that form are between 20 and 50 microns, within the range of natural cells.

"The beauty of this method is that a lot of labs already use liposomes and electroformation," said Majd. "However, traditionally they do not have proteins attached."

Another problem is the traditional method creates artificial cells in tens of sizes situated all over the place, she added. Other methods require complex devices such as microfluidics to create uniformly sized artificial cells. With the hydrogel stamping method, it is easy to control the size of artificial cells and to generate a large number of these cells efficiently.

The researchers would next like to incorporate more than just lipids and proteins into the artificial cells. One possibility is to bind potential drugs to the proteins and lipids.

Besides Majd, You Jung Kang, graduate student in biomedical engineering, and Harrison S. Wostein, undergraduate in bioengineering, worked on this project.

The Charles E. Kaufman Foundation at the Pittsburgh Foundation helped support this work.