How Bats Took Over The Night

Blessed with the power of echolocation — reflected sound — bats rule the night skies. There are more than 1,000 species of these echolocating night creatures, compared with just 80 species of non-echolocating nocturnal birds. And while it seems that echolocation works together with normal vision to give bats an evolutionary edge, nobody knows exactly how. 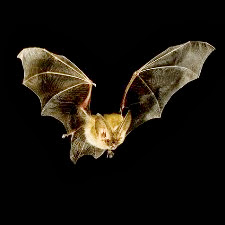 Now Dr. Arjan Boonman and Dr. Yossi Yovel of Tel Aviv University's Department of Zoology suggest that bats use vision to keep track of where they're going and echolocation to hunt tiny insects that most nocturnal predators can't see. The findings, published in Frontiers in Physiology, add to our scientific understanding of sensory evolution.

"Imagine driving down the highway: Everything is clear in the distance, but objects are a blur when you pass them," said Dr. Boonman. "Well, echolocation gives bats the unique ability to home in on small objects — mostly insects — while flying at high speeds."

Battle of the senses

Bats do most of their feeding at dusk, when insects are most active and there is still plenty of light. Under these conditions, vision seems a better option than echolocation — it conveys more information, and more quickly, at a higher resolution. The researchers wondered: If bats evolved vision before echolocation, as scientists believe, why did echolocation ever come along?

The team set out to answer this question by comparing the distances at which the two senses can detect small objects. To estimate the range of ultrasonic bat echolocation, the researchers played taped calls of two species of bats in a soundproof room and recorded the way the sound bounced off four dead insects — a moth, an ant, a lacewing, and a mosquito. Vision is hard to simulate, so, extrapolating from the findings of two previous studies, the researchers calculated the distance at which bats would be able to see the same insects in medium to low light.

Even erring on the side of vision in their estimates, the researchers found that echolocation was twice as effective as vision in detecting the insects in medium to low light — from 40 feet away versus the 20 feet that was the effective range with vision. They also note that echolocation is unaffected by objects in the background, while visual range is three-to-five fold worse when it has to contend with obstacles like vegetation. Previous studies have shown that echolocation provides more accurate estimates of the distance and velocity of objects, and sometimes even of the distance of the background behind them.

These results suggest that echolocation gives bats a huge evolutionary advantage, allowing them to track insects from further away and with greater accuracy at peak feeding time. Echolocation also, of course, allows bats to continue hunting into the night, when their competitors are blinded by darkness.

"We believe that bats are constantly integrating two streams of information — one from vision and one from echolocation — to create a single image of the world," said Dr. Yovel, also of TAU's Sagol School of Neuroscience. "This image has a higher definition than the one created by vision alone."

The combination of vision and echolocation opened up a large nocturnal advantage for bats in which they have multiplied and diversified — bats account for 20 percent of all classified mammal species on earth today. The researchers speculate that nocturnal birds may not have evolved their own ultrasonic echolocation for anatomical reasons. The next steps are to research how bats integrate echolocation and vision and what the evolutionary costs of echolocation are.