First discovered in 2007, "fast radio bursts" continue to defy explanation. These cosmic chirps last for only a thousandth of a second. The characteristics of the radio pulses suggested that they came from galaxies billions of light-years away. However, new work points to a much closer origin - flaring stars within our own galaxy. 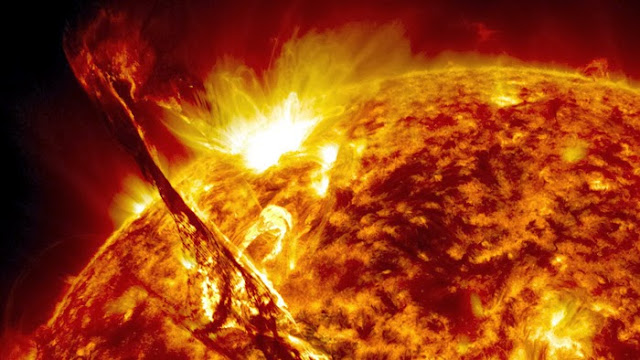 Fast radio bursts are both brief and bright, packing a lot of energy into a short time. Only six have been discovered to date, all of them in archival data. Each was detected only once, making follow-up studies difficult.

A detailed analysis of the bursts showed that the pulses passed through a large column of electrons on their way to Earth. If those electrons were spread out across intergalactic space, then the pulses must have crossed billions of light-years. As a result, they would have to come from extremely energetic events. Gamma-ray bursts don't produce the right radio frequencies, so astronomers looked to other extreme events like the collapse of a neutron star into a black hole.

Loeb and his colleagues reasoned that if the bursts came from a closer location, within the Milky Way galaxy, then they wouldn't require as much energy. The explanation could be more mundane.

Stellar flares fit the bill. Tightly packed electrons in the stellar corona would cause the same effect as the more diffuse intergalactic electrons.

Two types of stars are known to create radio bursts: young, low mass stars and solar-mass "contact" binaries which orbit so close that they share their outer, gaseous envelopes. Both types of star system would also fluctuate in brightness at optical wavelengths (i.e. visible light).

To test their theory Loeb and his colleagues searched the locations of three fast radio bursts to look for variable stars, using the telescopes at Tel-Aviv University's Wise Observatory, in Israel.

"It was straightforward to monitor these fields for several nights, to see if they showed anything unusual," says Dani Maoz of Tel Aviv University.

"We were surprised that, apparently, no one had done this before," adds Yossi Shvartzvald, a graduate student who led the observations.

They discovered a contact binary system in one location. The binary consists of two Sun-like stars orbiting each other every 7.8 hours. They are located about 2,600 light-years from Earth. Statistics of stars across the observed field of view show that there is less than a 5 percent chance that the binary star is in the right place by coincidence.

"Whenever we find a new class of sources, we debate whether they are close or far away," says Loeb. Gamma-ray bursts were initially thought to be coming from within the Milky Way; only later did astronomers learn they came from cosmological distances.

"Here we have exactly the opposite," explains Loeb. Fast radio bursts, initially thought to be distant, may actually originate from our own galaxy.

The study has been accepted for publication in the Monthly Notices of the Royal Astronomical Society.