About 65 million years ago, an asteroid or comet crashed into a shallow sea near what is now the Yucatán Peninsula of Mexico. The resulting firestorm and global dust cloud caused the extinction of many land plants and large animals, including most of the dinosaurs. At this week’s meeting of the American Geophysical Union (AGU) in San Francisco, MBARI researchers presented evidence that remnants from this devastating impact are exposed along the Campeche Escarpment—an immense underwater cliff in the southern Gulf of Mexico.

This map shows the Gulf of Mexico and the locations of the Campeche Escarpment and the buried impact crater that caused a global extinction event about 65 million years ago. 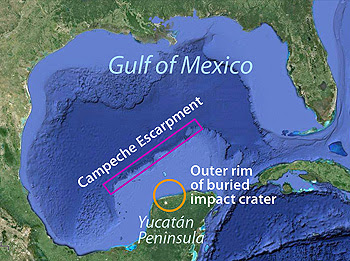 The ancient meteorite impact created a huge crater, over 160 kilometers across. Unfortunately for geologists, this crater is almost invisible today, buried under hundreds of meters of debris and almost a kilometer of marine sediments. Although fallout from the impact has been found in rocks around the world, surprisingly little research has been done on the rocks close to the impact site, in part because they are so deeply buried. All existing samples of impact deposits close to the crater have come from deep boreholes drilled on the Yucatán Peninsula.

In March 2013, an international team of researchers led by Charlie Paull of the Monterey Bay Aquarium Research Institute (MBARI) created the first detailed map of the Campeche Escarpment. The team used multi-beam sonars on the research vessel Falkor, operated by the Schmidt Ocean Institute. The resulting maps have recently been incorporated in Google Maps (maps.google.com) and Google Earth (earth.google.com) for viewing by researchers and the general public.

Paull has long suspected that rocks associated with the impact might be exposed along the Campeche Escarpment, a 600-kilometer-long underwater cliff just northwest of the Yucatán Peninsula. Nearly 4,000 meters tall, the Campeche Escarpment is one of the steepest and tallest underwater features on Earth. It is comparable to one wall of the Grand Canyon—except that it lies thousands of meters beneath the sea.

This close-up image of the Campeche Escarpment from the 2013 sonar survey shows a layer of resistent rock that researchers believe may contain rocks formed during an impact event 65 million years ago.

As in the walls of the Grand Canyon, sedimentary rock layers exposed on the face of the Campeche Escarpment provide a sequential record of the events that have occurred over millions of years. Based on the new maps, Paull believes that rocks formed before, during, and after the impact are all exposed along different parts of this underwater cliff.

Just as a geologist can walk the Grand Canyon, mapping layers of rock and collecting rock samples, Paull hopes to one day perform geologic “fieldwork” and collect samples along the Campeche Escarpment. Only a couple of decades ago, the idea of performing large-scale geological surveys thousands of meters below the ocean surface would have seemed a distant fantasy. Over the last eight years, however, such mapping has become almost routine for MBARI geologists using underwater robots.

The newly created maps of the Campeche Escarpment could open a new chapter in research about one of the largest extinction events in Earth’s history. Already researchers from MBARI and other institutions are using these maps to plan additional studies in this little-known area. Detailed analysis of the bathymetric data and eventual fieldwork on the escarpment will reveal fascinating new clues about what happened during the massive impact event that ended the age of the dinosaurs—clues that have been hidden beneath the waves for 65 million years.

In addition to the Schmidt Ocean Institute, Paull’s collaborators in this research included Jaime Urrutia-Fucugauchi from the Universidad Nacional Autónoma de Mexico and Mario Rebolledo- Vieyra of the Centro de Investigación Científica de Yucatán. Paull also worked closely with MBARI researchers, including geophysicist and software engineer Dave Caress, an expert on processing of multibeam sonar data, and geologist Roberto Gwiazda, who served as project manager and will be describing this research at the AGU meeting.

Overview of bathymetry of the Campeche Escarpment as mapped by the R/V Falkor.