In the classical view of evolution, species experience spontaneous genetic mutations that produce various novel traits—some helpful, some detrimental. Nature then selects for those most beneficial, passing them along to subsequent generations.

It’s an elegant model. It’s also an extremely time-consuming process likely to fail organisms needing to cope with sudden, potentially life-threatening changes in their environments. Surely some other mechanism could enable more rapid adaptive response. In this week’s edition of the journal Science, a team of researchers from Harvard Medical School and Whitehead Institute report that, at least in the case of one variety of cavefish, that other agent of change is the heat shock protein known as HSP90.

Surface form and cave form of Astyanax mexicanus differ in many morphological traits, the most prominent being the loss of pigmentation and the loss of eyes in the cave forms. 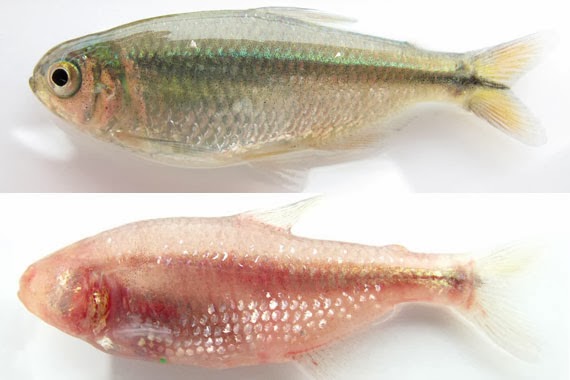 “It’s a very cool story in terms of the speed of evolution,” says Nicolas Rohner, lead author of the Science paper and a postdoctoral researcher in the lab of Harvard Medical School Genetics Professor Clifford Tabin.

Rohner notes that at some point many thousands of years ago, a population of Astyanax mexicanus (a fish indigenous to northeastern Mexico) was swept from its hospitable river home into the unfriendly confines of underwater caves. Facing a dramatically different environment, the fish were forced to adapt. Living in near total darkness, the fish did away with their pigmentation, developed heightened sensory systems to detect changes in water pressure and the presence of prey and, perhaps most strikingly, they lost their eyes. Although seemingly counterintuitive, the loss of eyes is thought to be an “adaptive” or beneficial trait, as the maintenance of a complex but now useless organ would come at a high metabolic cost. Thus, the fish could reallocate their finite physiological resources to biological functions more helpful in the cave setting.

Eye loss in these fish is considered to be a demonstration of an evolutionary concept known as “standing genetic variation,” which argues that pools of genetic mutations—some potentially helpful—exist in a given population but are normally kept silent. The manifestations of these mutations, that is, their impact on observable phenotypes, don’t emerge until the population encounters stressful conditions. But what exactly keeps those mutations at bay?

Enter Whitehead Member Susan Lindquist, whose research has shown that HSP90 silences such genetic variation in a variety of organisms, from fruit flies, to yeast, to plants. Lindquist’s work found that the normally robust cellular reservoir of HSP90 becomes depleted during periods of physiological stress. The loss of HSP90 activity allowed phenotypic changes to emerge quite rapidly. Although some emergent traits found in her lab were not adaptive, some clearly were.

“The delicate balance of protein folding—especially that controlled by HSP90—holds the key,” says Lindquist, who is also a professor of biology at MIT and an investigator of the Howard Hughes Medical Institute. “Moderate changes in the environment create stresses on protein folding, causing minor changes in the genome to have much larger effects. Because HSP90 governs the folding of the key regulators of growth and development it produces a fulcrum point for evolutionary change.”

Having seen Tabin’s work on the genetics of eye loss in cavefish, she proposed a research collaboration to determine whether HSP90 had been an evolutionary role-player in this vertebrate. The Tabin and Lindquist labs devised a complex set of experiments with cavefish and surface fish of the same species. Surface fish raised in the presence of a drug that blocks HSP90 activity (thereby mimicking a stressful environment) displayed significant variation in eye size—clearly implicating HSP90’s effects on this trait. Conversely, cavefish raised in the same conditions showed no increase in variation in the size of their eye orbits (although the cave fish have no eyes, their skulls retain the orbital cavity where their eyes once were). Intriguingly, however, these fish emerged with small orbits, showing that the genetics governing eye size remains responsive to HSP90.

Although impressive, these findings were chemically induced, leaving open the question of whether such HSP90-related effects would have been seen in nature. To answer this, researchers examined a host of conditions—ranging from pH to oxygen content to temperature—found in the surface and cave waters that are home to these fish. They discovered a considerable difference in conductivity, as measured by salinity, between cave and surface. Because low conductivity, a condition found in the caves, can trigger a heat shock response, they raised surface fish in water whose conductivity equaled that of native caves.

The results were essentially the same: fish raised in conditions of low conductivity showed significant variation in eye size. The scientists had shown that an environmental stressor could have the same effects as the chemical inhibition of HSP90.

“This is the first time that we can see in a natural setting where the stress came from and observe the variation that results,” says Tabin.

Adds Rohner: “This is the first study showing that this HSP90-mediated mechanism can be applied to vertebrates for real morphological adaptive traits.”

For Dan Jarosz, a former postdoctoral researcher in Lindquist’s lab, the study is an important validation of Lindquist’s work on evolution. Jarosz, now Assistant Professor of Chemical and Systems Biology and of Developmental Biology at Stanford University, had been involved in much of Lindquist’s work on HSP90 as a driver of evolution in yeast. He believes this latest work should help quiet those who are skeptical of the impact of this mechanism throughout the plant and animal kingdoms.

“We now have enough evidence to say that large, rapid environmental change can reveal new variation and change the outcomes of real evolution in nature,” he says.

This work is supported by the National Institutes of Health and the Damon Runyon Cancer Research Foundation.