Can A Glass Of Wine A Day Keep The Doctor Away?

It's the time of year when many of us celebrate the holidays with festive foods and drinks, including alcohol. No better time then to ask if it is true, as is widely held, that moderate consumption of alcohol is beneficial to health.

Ilhem Messaoudi is an associate professor of biomedical sciences in UC Riverside's School of Medicine. 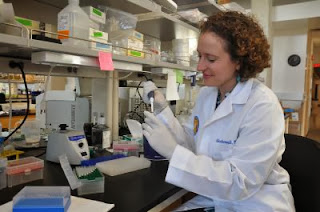 A research team led by an immunologist at the University of California, Riverside now has data that could put the question to rest. The researchers found that moderate alcohol consumption could bolster our immune system, and potentially our ability to fight infections.

The finding, published Dec. 17 in the journal Vaccine, can help lead to a better understanding of how our immune system works. It can also pave the way for potentially new interventions to improve our ability to respond to vaccines and infections, benefiting vulnerable populations, such as the elderly for whom the flu vaccine, for example, has been found to be largely ineffective.

"It has been known for a long time that moderate alcohol consumption is associated with lower mortality," said Ilhem Messaoudi, an associate professor of biomedical sciences in the School of Medicine and the lead author of the research paper. "Our study, conducted on non-human primates, shows for the first time that voluntary moderate alcohol consumption boosts immune responses to vaccination." Messaoudi did the bulk of the research while she was an assistant professor at the Oregon Health and Science University, where she collaborated with Kathleen Grant, a professor of behavioral neuroscience and a coauthor on the research paper. She joined UC Riverside earlier this year.

To study the impact of alcohol consumption on the immune system, the researchers trained 12 rhesus macaques to self-administer/consume alcohol on their own accord. The team first vaccinated the animals (against small pox) and then allowed them to access either 4 percent ethanol (the experimental group) or calorically matched sugar water (the control group). All the animals also had open access to water as an alternative fluid, as well as food. The researchers then proceeded to monitor the animals' daily ethanol consumption for 14 months. The animals were vaccinated one more time, seven months after the experiment began.

The research team found that over nine months of the animals' ethanol self-administration, mean daily ethanol intake varied markedly among them.

The animals' voluntary ethanol consumption segregated them into two groups: animals in the first group were those that consumed more alcohol, averaged a blood ethanol concentration (BEC) greater than the legal limit of 0.08 percent and were therefore designated 'heavy drinkers'; animals in the second group consumed less alcohol, averaged a BEC of 0.02-0.04 percent and were designated 'moderate drinkers.'

"These surprising findings indicate that some of the beneficial effects of moderate amounts of alcohol consumption may be manifested through boosting the body's immune system," Messaoudi said. "This supports what has been widely believed for some time: moderate ethanol consumption results in a reduction in all causes of mortality, especially cardiovascular disease. As for excessive alcohol consumption, our study shows that it has a significant negative impact on health."

Alcohol abuse kills 25,000 Americans annually and is one of the leading causes of preventable death in the country. Two thirds of U.S. adults consume approximately four drinks a week, considered to be a moderate amount by most consumers.

"If you have a family history of alcohol abuse, or are at risk, or have been an abuser in the past, we are not recommending you go out and drink to improve your immune system!" Messaoudi said. "But for the average person that has, say, a glass of wine with dinner, it does seem, in general, to improve heath, and cardiovascular function in particular, and now we can add the immune system to that list."

The study was carried out under strict accordance with the recommendations outlined in the Guide for the Care and Use of Laboratory Animals of the National Institutes of Health, the Office of Animal Welfare and the U.S. Department of Agriculture. The study was also approved by the Oregon National Primate Research Center Institutional Animal Care and Use Committee.

"Next, we plan to harness our observations made in this study to address bigger questions on the immune system, such as how can we boost our immune responses to vaccination, a particular challenge for our elderly," Messaoudi said.