Boil Water In A Trillionth Of A Second: Ultrafast Heating Of Water

Scientists from the Hamburg Center for Free-Electron Laser Science have devised a novel way to boil water in less than a trillionth of a second. The theoretical concept, which has not yet been demonstrated in practice, could heat a small amount of water by as much as 600 degrees Celsius in just half a picosecond (a trillionth of a second). That is much less than the proverbial blink of an eye: one picosecond is to a second what one second is to almost 32 millennia. This would make the technique the fastest water-heating method on earth.

A single terahertz flash can heat the water cloud to 600 degrees centigrade, while leaving all water molecules intact. 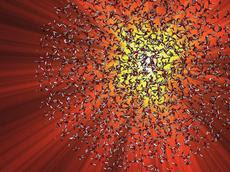 The novel concept opens up interesting new ways for experiments with heated samples of chemical or biological relevance, as the inventors report in this week's issue of the scientific journal Angewandte Chemie - International Edition (Nr. 51, 16 December). "Water is the single most important medium in which chemical and biological processes take place," explains DESY scientist Dr. Oriol Vendrell from the Center for Free-Electron Laser Science CFEL, a cooperation of DESY, the University of Hamburg and the German Max Planck Society. "Water is not just a passive solvent, but plays an important role in the dynamics of biological and chemical processes by stabilising certain chemical compounds and enabling specific reactions."

All it takes for superfast water heating is a concentrated flash of terahertz radiation. Terahertz radiation consists of electromagnetic waves with a frequency between radio waves and infrared. Terahertz flashes can be generated with devices called free-electron lasers that send accelerated electrons on a well defined slalom course. The particles emit electromagnetic waves in each bend that add up to an intense laser like pulse. The terahertz pulse changes the strength of the interaction between water molecules in a very short time, which immediately start to vibrate violently.

The scientists calculated the interaction of the terahertz flash with bulk water. The simulations were performed at the Supercomputer Center Jülich and used a total of 200,000 hours of processor time by massively parallel computing. On a single processor machine this would correspond to about 20 years of computation. "We have calculated that it should be possible to heat up the liquid to about 600 degrees Celsius within just half a picosecond, obtaining a transiently hot and structureless environment still at the density of the liquid, leaving all water molecules intact," explains Vendrell.

The novel method can only heat about one nanolitre (billionth of a litre) in one go. This may sound small, but is large enough for most experiments. For comparison, ink-jet printers fire droplets that are as small as one picolitre, which is a thousand times less than a nanolitre.

A rendering of the molecular water cloud. 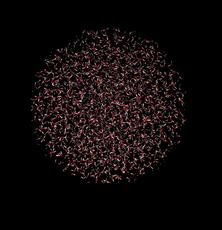 "The idea is to heat-up the 'solvent' so that many molecules start the desired chemical process at the same time and then watch the reaction evolve," explains Vendrell, who worked out the super heater with co-authors Pankaj Kr. Mishra and Prof. Robin Santra, also of CFEL. Although the hot mini-cloud will fly apart in less than a millisecond (a thousandth of a second), it lasts long enough to unravel everything of interest in thermal reactions such as the combination of small organic molecules to form new substances. The team currently investigates how the intense pulse of terahertz radiation affects different types of molecules dissolved in water, from inorganic to biological systems.

The reaction progress can be probed with ultrashort X-ray flashes like they will be produced by the 3.4-kilometre-long X-ray free-electron laser European XFEL, which currently is being built between the DESY campus in Hamburg and the neighbouring town of Schenefeld. When completed, the European XFEL will be able to generate 27,000 intense X-ray laser flashes per second, which can for example be used to record the different stages of chemical reactions.

One advantage of the heating method is that the terahertz pulse can be very well synchronised with the X-ray flashes to start the experiment and then probe the reaction after a well defined time. "The transient and hot environment achieved by the terahertz pulse could have interesting properties, like a matrix to study activated chemical processes," says Vendrell. "This will be the subject of further investigations."

Deutsches Elektronen-Synchrotron DESY is the leading German accelerator centre and one of the leading in the world. DESY is a member of the Helmholtz Association and receives its funding from the German Federal Ministry of Education and Research (BMBF) (90 percent) and the German federal states of Hamburg and Brandenburg (10 percent). At its locations in Hamburg and Zeuthen near Berlin, DESY develops, builds and operates large particle accelerators, and uses them to investigate the structure of matter. DESY’s combination of photon science and particle physics is unique in Europe.