Astronomers led by a Curtin University researcher have discovered a new population of exploding stars that “switch off” their radio transmissions before collapsing into a Black Hole.

These exploding stars use all of their energy to emit one last strong beam of highly energetic radiation – known as a gamma-ray burst – before they die. 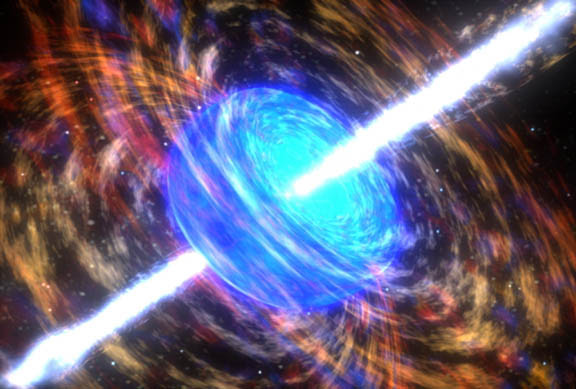 Up until now, it was thought all gamma-ray bursts were followed by a radio afterglow – a premise that a team of Australian astronomers of the Centre for All-sky Astrophysics (CAASTRO) at Curtin University and the University of Sydney originally set out to prove correct.

“But we were wrong. After studying an ultra-sensitive image of gamma-ray bursts with no afterglow, we can now say the theory was incorrect and our telescopes have not failed us,” lead researcher and Curtin research fellow Dr Paul Hancock said.


The technique used to create the ultra-sensitive image was recently published in The Astrophysical Journal.

It allowed for the stacking of 200 separate observations on top of each other to re-create the image of a gamma-ray burst in much better quality – yet, no trace of a radio afterglow was found.

“In our research paper we argue that there must be two distinct types of gamma-ray burst, likely linked to differences in the magnetic field of the exploding star,” Dr Hancock said.

“Gamma-ray bursts are thought to mark the birth of a Black Hole or Neutron Star – both of which have super-dense cores. But Neutron Stars have such strong magnetic fields (a million times stronger than those of Black Holes) that producing gamma-rays are more difficult.

“We think that those stars that collapse to form a Neutron Star have energy left over to produce the radio afterglow whereas those that become Black Holes put all their energy into one final powerful gamma-ray flash.”

New work is underway to test the team’s theory and to see if there are other subtle ways in which the two types of bursts differ.

“We now have to take a whole new look at gamma-ray bursts – so far this work has shown that being wrong is sometimes more interesting than being right,” Dr Hancock said.

Telescope facilities such as the Australia Telescope Compact Array in northern New South Wales and the Karl Jansky Very Large Array in the US both have observing programs to search for gamma-ray burst afterglows and have been recently upgraded to increase their sensitivity.