A 115-million-year-old fossilized wasp from northeast Brazil presents a baffling puzzle to researchers. The wasp's ovipositor, the organ through which it lays its eggs, looks a lot like those of present-day wasps that lay their eggs in figs. The problem, researchers say, is that figs arose about 65 million years after this wasp was alive.

Although it lived roughly 65 million years before the earliest known occurrence of figs, the fossil wasp's ovipositor closely resembles those of today's fig wasps. 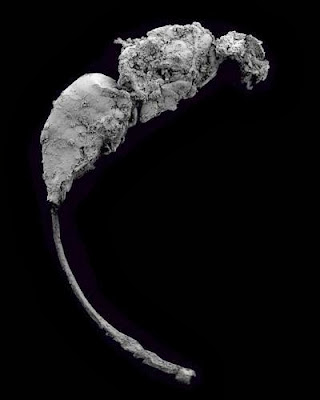 A report of the findings appears in the journal Cretaceous Research.

The wasp belongs to the Hymenoptera superfamily known as Chalcidoidea, which parasitize other insects, spiders and some plants. The group includes about 22,000 known species and is estimated to contain up to 500,000 species.

"This is a tiny parasitic wasp, it's the smallest fossil wasp found in this particular deposit and it's the oldest representative of its family," said Sam Heads, a paleoentomologist at the Illinois Natural History Survey at the University of Illinois. "More importantly, it's possible that this wasp was fig-associated, which is interesting because it's Early Cretaceous, about 115 to 120 million years old. That's a good 65 million years or so prior to the first occurrence of figs in the fossil record."

"The fossil record of insects is very extensive both geographically and temporally. It goes back 415 to 420 million years and preserves the ancestral forms of a lot of the insects that are alive today," he said. "So it's a great resource for understanding insect evolutionary history and the distribution of insects across the planet in the past." 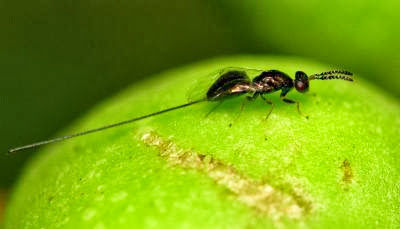 The presence of a wasp with an ovipositor that looks like those used by fig wasps today is not hard evidence that figs were around in the fossil wasp's day – a time of dinosaurs, Heads said.

"There is no evidence of the existence of figs at this time and the most recent molecular study doesn't place figs that far back," he said. While it is possible that figs are older than current studies indicate, it is also possible that "something like a fig was around and this wasp was parasitizing whatever that was."

This could be an example of convergent evolution, where separate species independently evolve similar traits, he said. Or the fossil wasp could be the ancestor of the fig wasp, and its ovipositor, first adapted to a plant or fruit that was around long before the fig, later found a use in figs.

Comparing insect fossils with living organisms offers new insights into the natural history of insects, the plants they pollinate and their hosts or prey, Heads said. This differs significantly from studies of the fossils of animals that have become extinct.

"When you talk about paleontology to people the first thing they think of is dinosaurs," he said. "And that's great. Dinosaurs are really exciting, wonderful animals. But for the most part, they're extinct. With insects and other arthropods like spiders and scorpions, they're around still. So we have modern forms to compare our fossil forms to, which is incredibly useful."


Contacts and sources:
Diana Yates
University of Illinois at Urbana-Champaign
on December 10, 2013