The Wari, a complex civilization that preceded the Inca empire in pre-Columbia America, didn't rule solely by pillage, plunder and iron-fisted bureaucracy, a Dartmouth study finds. Instead, they started out by creating loosely administered colonies to expand trade, provide land for settlers and tap natural resources across much of the central Andes.

This is the Cusco region, with areas of full-coverage archeological surveys reported in this paper. 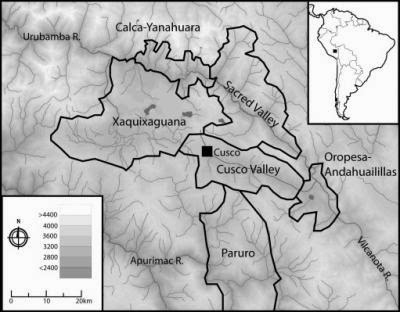 The results, which appeared in the Journal of Anthropological Archaeology in October 2013, shed new light on how early states evolved into empires in the region that became the Inca imperial heartland.

The study is the first large-scale look at the settlement patterns and power of the Wari civilization, which flourished from about AD 600-1000 in the Andean highlands, well before the Inca empire's 15th century rise. Relatively little is known about the Wari -- there are no historical documents and archaeologists are still debating their power and statecraft.

This is an aerial view of Pikillacta, facing toward the Cusco Basin.
Credit: Department of Library Services, American Museum of Natural History

Many scholars think the Wari established strong centralized control -- economic, political, cultural and military – like their Inca successors to govern the majority of the far-flung populations living across the central Andes. But the Dartmouth study suggests that while the Wari had significant administrative power, they did not successfully transition most colonies into directly ruled provinces.

"The identification of limited Wari state power encourages a focus on colonization practices rather than an interpretation of strong provincial rule," says Professor Alan Covey, the study's lead author. "A 'colonization first' interpretation of early Wari expansion encourages the reconsideration of motivations for expansion, shifting from military conquest and economic exploitation of subject populations to issues such as demographic relief and strategic expansion of trade routes or natural resource access."
This is the distribution of Wari pottery identified through survey, with three-hour walking intervals from Pikillacta and Tankarpata. 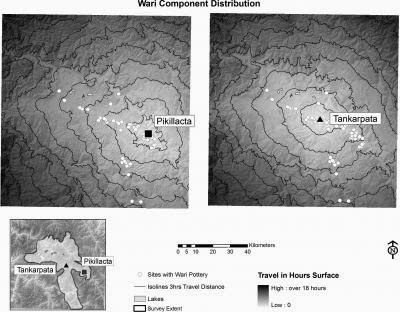 The results are based on a systematic inventory of archaeological surveys covering nearly 1,000 square miles and GIS analysis of more than 3,000 archaeological sites in and around Peru's Cusco Valley. The data indicate Wari power did not emanate continuously outward from Pikillacta, a key administrative center whose construction required a huge investment. Instead, the locations of Wari ceramics indicate a more uneven, indirect and limited influence even at the height of their power than traditional interpretations from excavations at Wari sites.