Much like the Grand Canyon, Nanedi Valles snakes across the Martian surface suggesting that liquid water once crossed the landscape, according to a team of researchers who believe that molecular hydrogen made it warm enough for water to flow. 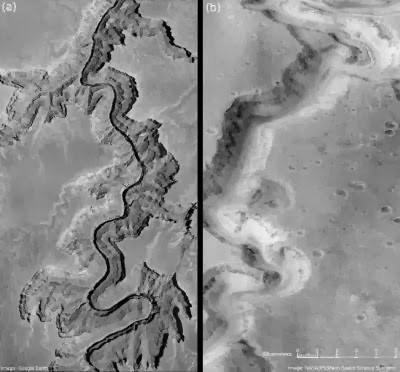 The presence of molecular hydrogen, in addition to carbon dioxide and water, could have created a greenhouse effect on Mars 3.8 billion years ago that pushed temperatures high enough to allow for liquid water, the researchers state in the current issue of Nature Geoscience.

Previous efforts to produce temperatures warm enough to allow for liquid water used climate models that include only carbon dioxide and water and were unsuccessful. The researchers used a model to show that an atmosphere with sufficient carbon dioxide, water and hydrogen could have made the surface temperatures of Mars warm to above freezing. Those above-freezing temperatures would allow liquid water to flow across the Martian surface over 3.8 billion years ago and form the ancient valley networks, such as Nanedi Valles, much the way sections of the Grand Canyon snake across the western United States today.

"This is exciting because explaining how early Mars could have been warm and wet enough to form the ancient valleys had scientists scratching their heads for the past 30 years," said Ramirez. "We think we may have a credible solution to this great mystery."

The researchers note that one alternative theory is that the Martian valleys formed after large meteorites bombarded the planet, generating steam atmospheres that then rained out. But this mechanism cannot produce the large volumes of water thought necessary to carve the valleys.

"We think that there is no way to form the ancient valleys with any of the alternate cold early Mars models," said Ramirez. "However, the problem with selling a warm early Mars is that nobody had been able to put forth a feasible mechanism in the past three decades. So, we hope that our results will get people to reconsider their positions."

Ramirez and post-doctoral researcher Ravi Kopparapu co-developed a one-dimensional climate model to demonstrate the possibility that the gas levels from volcanic activity could have created enough hydrogen and carbon dioxide to form a greenhouse and raise temperatures sufficiently to allow for liquid water. Once they developed the model, Ramirez ran the model using new hydrogen absorption data and used it to recreate the conditions on early Mars, a time when the sun was about 30 percent less bright than it is today.

"It's kind of surprising to think that Mars could have been warm and wet because at the time the sun was much dimmer," Ramirez said.

Mars' mantle appears to be more reduced than Earth's, based on evidence from Shergotty, Nahkla, and Chassigny meteorites, Martian meteorites named for the towns near which they were found. A more reduced mantle outgasses more hydrogen relative to water, thus bolstering the hydrogen greenhouse effect.

"The hydrogen molecule is symmetric and appears to be quite boring by itself," said Ramirez. "However, other background gases, such as carbon dioxide, can perturb it and get it to function as a powerful greenhouse gas at wavelengths where carbon dioxide and water don't absorb too strongly. So, hydrogen fills in the gaps left by the other two greenhouse gases."