Toward A Urine Test For Detecting Blood Clots

Detecting dangerous blood clots, which can cause life-threatening conditions such as strokes and heart attacks, leading causes of death for men and women in the U.S., has been a coveted and elusive goal. But scientists are now reporting progress in the form of a simple urine test. Their study, in which they demonstrated that the test works using laboratory mice, appears in the journal ACS Nano.

Blood clots, which can cause life-threatening conditions such as strokes and heart attacks, are a challenge to detect, but scientists are now reporting progress in the form of a urine test. 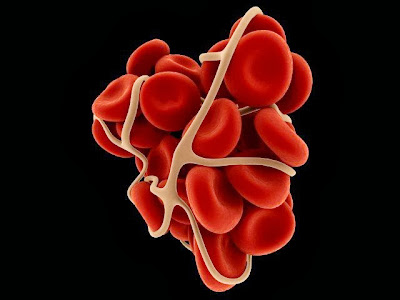 Sangeeta N. Bhatia and colleagues, including lead author and Ph.D. candidate Kevin Lin and postdoctoral fellow Gabriel Kwong, point out that blood clots — clumps of platelets and fibrin proteins — can threaten to choke off blood flow and lead to a wide range of serious and sometimes fatal conditions including atherosclerosis and stroke. Usually, blood clots are a good thing. They form a plug that stops the bleeding after an injury. But sometimes, a clot forms when it really isn’t needed, such as when a person sits too long on a long-distance flight and develops “deep-vein thrombosis.”

In that case, a clot forms in the leg, blocking blood flow and causing leg pain. But it also can dislodge and move throughout the body to the heart or even the brain, which is life-threatening. Diagnosing a blood clot, or thrombosis, is tricky, however, and current clinical tests aren’t always reliable. Bhatia’s team wanted to develop a simple and more reliable way to test for these obstructive blood clots.

They describe development and testing of “synthetic biomarkers” — lab-made materials for detecting what is going on in the body. They added small pieces of proteins called peptides onto nanomaterials that are similar to those already approved and used in the clinic.

They injected the tiny nanomaterials into mice, which are stand-ins for humans. The peptides got chopped up if a blood clot was actively forming in the mice, and those peptide fragments were detected in a simple urine test. “Our results demonstrate that synthetic biomarkers can be engineered to sense vascular diseases remotely from the urine and may allow applications in point-of-care diagnostics,” the researchers state.